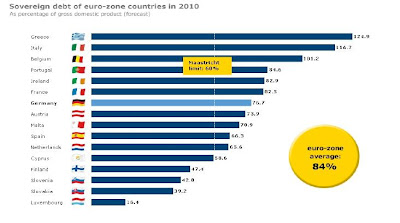 Richard Douthwaite, of the Dublin-based think-tank FEASTA, has produced a useful paper offering solutions to the Eurozone crisis from an Irish perspective. The solution, which he terms 'deficit easing', is similar to that proposed by the more radical proponents of the Green New Deal, i.e. that money is created by governments to be invested in the transition to a low-carbon economy. This will support economies otherwise facing depression, while making our basic support systems resilient to climate-related weather shocks. 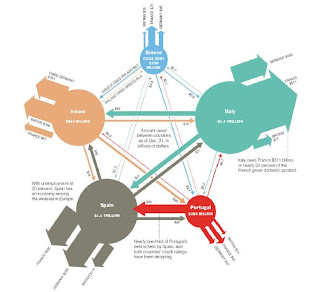 Since, as shown in the graphic, all the countries of the Eurozone are in debt, and therefore engaging in austerity measures, any policy designed to grow or trade our way out of the economic decline cannot be effective. The second graphic shows how all the debt, both public and private, is interconnected. So a collective solution is the only hope of success.

Richard's paper has the clarity and conviction that would be expected from one of the world's leading alternative economists. I would be inclined to add two small additional points. The first is the political point made by Robert Peston, who fished around in a lengthy and probably extremely tedious report from the Bank of England to find the nugget of data: in 2009 public support for the banking sector amounted to £100bn. This is more than half the so-called 'structural deficit' and indicates the cost to all of us of not finding a structural solution to the banking crisis.

Second, Richard's paper surprisingly makes no references to the link between financial expansion and resource exploitation. He has argued this elsewhere and would I'm sure be in agreement but it is important that all radical economists keep this planetary perspective in mind - and continue to draw attention to it - when proposing our monetary solutions.
. Tweet
Posted by Molly at 13:24