A sideways look at Christmas 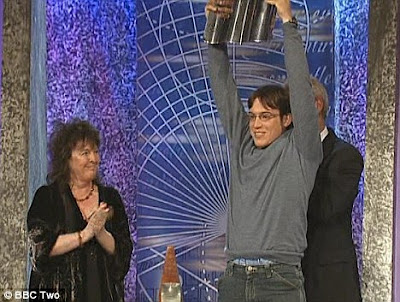 I have had a couple of near misses with poet laureate Carol-Ann Duffy. First a colleague hosted the post-funeral party for the local and much-loved poet U. A. Fanthorpe. A bevvy (could that be the word for a collection of female poets) arrived at the house and drank their way through the contents of the wine cellar, which given the nature of the occasion was entirely understandable. The further activities of her eminence are best kept under wraps.

Then my son was part of the winning University Challenge team last year (I think this is the first time I have mentioned this?!) and who else should be booked to present the rather kitsch prize than Ms Duffy herself?

Carol Ann Duffy's most famous colleciton is The World's Wife, a wry look at the world from the perspective of famous men's spouses. Shortly before being given the top job she wrote a poem from Mrs Scrooge for the Guardian. She turns out to be a role-model for our times and the poem a gift. The ghost of Christmas Past has a message that is an appropriate one for this blog:

'But then she heard a cracking, rumbling groan
and saw huge icebergs calving from the floe
into the sea;
then, further out, a polar bear, floating,
stranded,
on a raft of ice.
"The Polar Ice Cap melting," said the Ghost,
"Can mankind save it?"
"Yes, we can!" cried Mrs Scrooge. "We must!"
"I bring encouragement from Scrooge's dust," replied the Ghost.
"Never give up. Don't think one ordinary human life
can make no difference - for it can!"'
. Tweet
Posted by Molly at 09:56