Who is rating whom?

What exactly are the credit-rating agencies up to? I've been intrigued by the debates about who in the world economy is really behaving like a pig. Under the rules agreed at Maastricht, all the EU members have to produce a periodic report detailing how well they are meeting the criteria agreed there in terms of national economic probity. This relates primarily to how much you borrow relative to how much you earn as a nation, measured in terms of GDP. The latest reports for 2009-10 are available on the EU's website.

Reading through these is a lesson in the cultural variety of Europe and so finding the necessary figures is not as straightforward as we might hope. The figures reproduced here illustrate two distinct measures of the state of a country's finances: the amount each needs to borrow this year (the deficit) and the amount of historical borrowing (the national debt). Both are as a percentage of GDP - the accepted measure of how much life there is a nation's economy.

This is important, because it means that the absolute sums of money Greece needs to borrow are much smaller than those Germany is borrowing, but because the comparator is larger Germany's debt appears relatively small. This is valid, in the sense that Germany can pay for its debts because it exports more. But the size of borrowing by Europe's larger nations reduces the pool of available investors, and itself makes Greece's debt less attractive. As speculators work against Greek debt, Greece has to pay a higher rate of return, which pushes it further into debt. 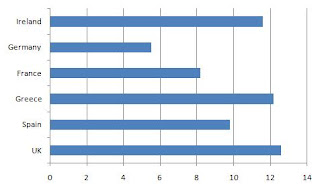 The first figure illustrates how much the countries expect to borrow this year. It illustrates that, in a recession, countries borrow hugely to keep their economies from imploding. Capitalist economics and the debt-money system makes this inevitable. But the comparison makes clear that the UK is borrowing more than Greece, with Ireland only slightly behind. This has been illustrated graphically by researchers at the University of Sheffield. The reason that Greece is coming under the cosh is that its politicians are not convincing the credit raptors that they will succeed in cutting wages and services, whereas Ireland has. 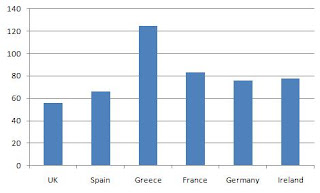 If we turn to the second figure, which illustrates total national debt, then we see the problem for Greece, whose historic debt is 124% of its national output in any year. This is the result of a country with a small capacity for production attempting to give its people a European lifestyle. But wasn't that the promise the European Union offered?

And what about the UK, which comes out of the second figure looking surprisingly - dare I say suspciously - healthy? As Faisal Islam explained on Channel 4 News on budget day, the reason that more money was found and the UK's deficit had apparently shrunk was almost entirely the result of changing the projections about economic growth. Even with these unrealistically positive expectations, our national debt is still projected to rise to 77% of GDP by 2013. I dare say the politicians in Greece wish they could get away with this, but they can't. Because we have the pound and they have given up their own currency to become subject to the whim of Germany, the bulwark of the Eurozone.

It was the large and powerful economic nations of Europe who created the euro, and in spite of the mealey-mouthed justifications around sharing the wealth with the transition and Mediterranean countries, it was always going to work in their interests. Export markets increased and the transaction costs of sending goods overseas fell. The price that had to be paid was supporting the weaker economies of the EU; Germany and France are now reneging on their part of the deal.

This is a dangerous game. The Greeks have already responded to German self-interest by raising the spectre of the Second World War. So the monetary pact is increasing the very tensions in Europe that the EU was created to prevent. Tweet
Posted by Molly at 19:22