Come On You Reds! 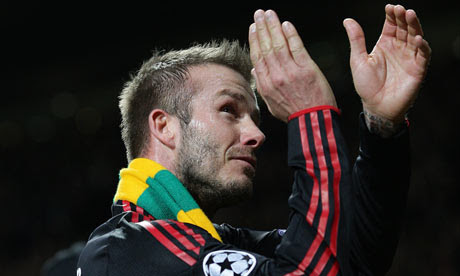 It was this image of David Beckham, wearing the green-and-gold blazon of the gathering campaign against the ownership of Manchester United by the Glazers, which made it clear to me that the move towards football supporters' trusts was more than a minority sport to warm the hearts of those of us on the mutual fringe of economic life.

Here is evidence that capitalism has overplayed its hand. The working men of this country ignored the way it destroyed their workplaces, their families, even the music they enjoyed. But now it is serious: now it has reached the place closest to their heart. Capitalism is destroying football, and that hurts. The billionnaires who have moved into the game are wrecking the sport, but also wrecking our football clubs as businesses.

Marx theorised the commodification of aspects of life that we value as being central to the social process of alienation. The products of our labours are usurped by the owners of capital who employ us, and something of our essence is stolen too. 21st-century capitalism extends this process by what is known as 'financialisation', so that every aspect of economic life is hollowed out, its meaning being replaced by the empty token of money. In work we see the hegemony of the accountant; in music the rise of the manufactured band.

But it is for football that people are apparently prepared to stop whingeing and take action. New research commissioned by Co-operatives UK indicates that 83 per cent of Manchester United fans and 72 per cent of Liverpool fans thought their club would be better off as a co-op. The YouGov poll found that 56% of all the football fans who gave an opinion agreed. Manchester United fans were willing to invest about £600 each, which could raise the £2.34bn. needed to buy the club.

The latest plan afoot to save Manchester United from becoming a hollow icon has been inspired partly by the example of Barca - always a co-operative and arch-rival to the formerly pro-Franco Real Madrid, who Beckham chose to play for - which has always been a co-operative. The 'Red Knights' plan to raise investment finance to buy the club and then sell shares to its own fans. Whether they seek to gain from this financially is hard to assess, but we might hope that the sense that ownership matters it brings could spill over from the terraces into the workplaces of this country. Tweet
Posted by Molly at 08:40