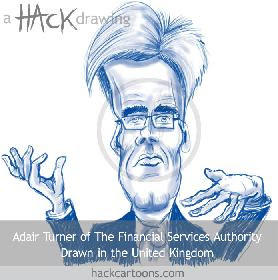 In between the story of the sweet child being reunited with his family in Pakistan and episode 37 of the media's latest favourite soap The Ashcroft Files you will have been forgiven for missing something rather important that happened yesterday. I've already referred to Adair Turner as 'crumpet', but my feeling for him grows warmer by the day.

First he broke ranks with the ranks of capitalist pigs by supporting the Tobin Tax, before questioning the social value of much of what happens in the Square Mile. Yesterday's intervention in the unaccountably muted debate about the structural problems of global capitalism and how to resolve them was different in kind. Lord Turner, former head of the CBI and therefore advocate on behalf of the business sector, suggested greater political control over the economy.

The specific policy suggestion that caught my eye was that the government should return to managing credit for the public good, but he has other policies that are clearly directed towards reversing the disastrous and amoral licence which has been enjoyed by the finance sector since Big Bang in 1986. The Turner Review is a regulatory review, that is to say it explores the relationship between private finance businesses and the political authorities. And the man who once argued for the interests of the private sector is now calling for more intervention by government.

It was quite a shock for me, reading a report from what I confidently consider to the opposition, and find in it many of the proposals I have myself been calling for. It would be nice to think that Lord Turner had seen the errors of his ways, or experienced some kind of moral conversion. Much more likely is that, just as Thatcher became converted to environmentalism to make sure she could control that debate, the interests of capital realise that an adaptation is necessary. And if they are beginning to support a change as radical as allowing even a modicum of political control over the worst excesses of the casino economy, we can assume that the the globalist capitalist system is much more vulnerable than it portrays itself to be. Tweet
Posted by Molly at 08:20