Living Lightly on the Land 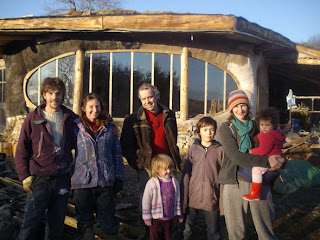 The Land magazine brought good news this month of a series of appeals decisions that had been won by low-impact dwellers - and particularly in Wales.

The grandmother of all these victories for a sustainable lifestyle is Lammas - a low-impact community that grew out of the occupation of a pre-war community of wooden homes at Holts Field near Swansea. The residents grew tired of struggling to resist eviction in favour of development and created a dream to build their own community in Pembrokeshire instead.

They were supported in this by some unexpectedly inspired planning officers working inside Pembrokeshire County Council, who decided to do their jobs properly and apply the lip-service commitments to sustainability that were enshrined in their planning policies. The result was Policy 52 on Low Impact Development, a supplementary planning guidance note that permitted people to build homes on the land if they could provide a plan for meeting at least 75% of needs for livelihood directly from the land.

Lammas has been the test case for the implementation of this policy which, while consistent with the Council's stated sustainability objectives, and beneficial for the planet, ran counter to the Tory councillors who dominated the local authority in 'little England beyond Wales'. The ripples are now moving outward to influence national planning policy.

The Welsh Assembly is now developing the original Policy 52 into an overall low-impact policy to be included in the TAN6 Welsh planning guidance for the countryside under the title One Planet Development. This is a significant victory for those who seek to build human communities that are embedded in and respectful of the land, against those who seem determined to confuse the word 'environment' with the word 'view'. Tweet
Posted by Molly at 09:39