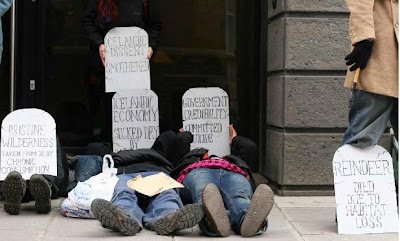 I'm struggling to understand what has happened with the Icesave debacle. It seems to me a fairly open-and-shut case. A bunch of naive but self-interested investors, egged on by internet and media commentators who made their living from touting risky financial ventures, put their money into banks outside our national jurisdiction. It is the first rule of money that the higher the return the higher the risk. Their gamble did not pay off and they lost their money.

This much makes sense. The bit I find hard to follow is why anybody who did not take the same risk, who did not enjoy the same returns, who invested their own money closer to home, perhaps in a secure, mutual savings institution now has to contribute to recompensing the high-risk investors for their loss. How is this different from innocent bystanders having to club together to repay a drunken gambler for a misguided punt on the National?

Now let's look at it from the Icelandic side. The ordinary people of Iceland have no doubt going about their ordinary business - catching fish, wallowing in hot pools, enjoying mud massages applied by lowly paid Baltic workers, whatever they get up to to keep themselves sane through the long dark winters. They had no democratic control over the activities of their Viking raiders, who sucked massive amounts of capital into their country from the unstable global economy. Anybody daft enough to invest anything significant in a company apparently domiciled in such a minute and wind-blown volcanic island was surely due for a catastrophic fall at some point.

But now these same self-respecting Icelanders are expected to put their hands in their pockets to compensate foreign governments whose foreign citizens made bad choices. And this is no small amount of compensation. If you add together the £2.3bn. offered to the UK government in the latest negotiations and the £1bn. offered to the Dutch and divide the total by Iceland's tiny 300,000 population you soon realise that every pensioner, worker, and child has to find £11,000 to support this compensation. I wonder how many of the individual investors in the UK and Netherlands lost so much.

The prime lesson from the past two years of credit crisis has been that the gains have been privatised while the losses remain with the public. The Icelandic public are rebelling against this law; we should do the same. Tweet
Posted by Molly at 08:27