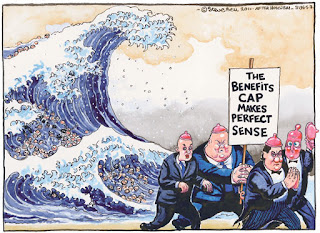 The electoral timetable is more pronounced than ever since this government introduced fixed-term parliaments. So, two years out from the next general election, Labour have entered the phase of their political messaging chart that is labelled 'reinforce core messages', no longer feeling able to get away with keeping from us their darkest, inner thoughts.

If their approach to welfare is anything to judge by then it is no surprise that they have delayed revealing their true colours for as long as possible. In his speech last week Ed Miliband made clear that, not only is he going to abandon Labour's traditional commitment to the principle of universalism--which he himself has defended eloquently since becoming his party's leader--but they are also going to accept the draconian and illogical welfare cap, a concept introduced into policy-making by the arch-deacon of austerity George Osborne.

The concept itself is oppressive, as though people made choices about being ill or growing old, as if we could somehow make a decision not to become unemployed or to need help in supporting our children. Of course it is these implications that appeal most to Tory policy-makers who have no compassion for those in need, but that Labour should also support them is disgraceful. Most importantly the concept of a welfare cap forces the rationing of funds for the sorts of services that a civilised society demands and, given that the most needy are least able to fight for their rights, it ensures a miserable future for the most vulnerable of our citizens.

As discussed in a recent paper I co-wrote for the Green House thinktank, the most fundamental questions about social policy are about the ownership and distribution of resources. Traditional socialist parties would have accepted this and based their policy on it, but the ability to connect wealth accumulation and the need for redistribution appears to have deserted all but the Greens. Two policies that it draws immediately into the discussions are a land tax and a citizens' income scheme. Together these form a nexus which ensures that those who have acquired assets are forced to share the value of them with the population as a whole: assets are a social resource not a private benefit.

From conservative Switzerland comes hope that the Citizens' Income policy may soon be the subject of serious political debate in a leading democratic nation. Campaigners for a basic income have achieved the 100,000 signatures on their petition which triggers an automatic referendum on the issue within two years. And if Switzerland's particular approach to accumulating wealth is problematic for you, perhaps we could turn our attention to Norway, where oil wealth was not considered as private property, as it was in the UK. The government took a profitable stake in the industry on behalf of its citizens and also taxed private companies' earnings. The result is the largest sovereign wealth fund in the world, commonly known as the Oil Fund, which will pay for the pensions of Norway's citizens.
.
Tweet
Posted by Molly at 10:49