From Bread and Circuses to Plastic Surgery and Football 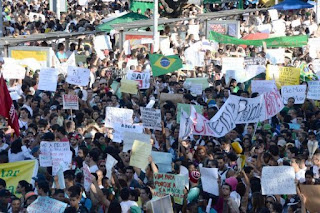 The question resonating around the world after the demonstrations in Brazil is why the dissatisfaction is emerging from the 'middle class', from those who have gained much from the economic boom that the country has enjoyed over the last 20 years. I would  like to claim that my rousing public speeches during my recent visit to Brazil were the catalyst that inspired the protests, but since I only spoke at the university in Sao Paulo this would be an outrageous lie. In fact I had no hint that these demonstrations were on their way. What I did experience was a horrifying level of advertising desperately trying to funnel the new wealth towards private, individualist consumption. Can it be that the demonstrations are proof of the ultimate dissatisfaction people feel with this as the end of a human life?

The erosion of democratic politics in the world after globalisation has led to a world where the young do not believe in the organised politics of the party. When all politicians look the same, espouse the same message and act as mouthpieces for corporate interests politics itself becomes tarnished. If the market is at the heart of all political ideologies what is the point of voting or attaching yourself to a party? Of course I have to say that I think the world's green parties are different, but that message is not being relayed though the media and is not reaching the people on the streets.

In Brazil the disillusion set in under Lula, the former trade-union unionist who had been in gaol under the dictatorship and was President for the first decade of this century. Although the evidence to support this is patchy at best, the suggestion made by radical critics to me was that Lula had made a deal with the denizens of global finance that he would not challenge the basic rules of capitalism in his country. Private enterprise would be allowed to flourish and people would be encouraged to content themselves with consumer goods rather than seeking to wrest control of the means of production from their betters. It is this deal that appears to be threatened by the demonstrations and the reaction from Dilma Rousseff, herself formerly a guerrilla fighter, is awaited with interest. Can she use the street mobilisations to increase the radical stance of her government? And does she wish to?

The mobilisation of political energy amongst the educated young of the world is exhilarating. It is the first step towards the next generation taking on the responsibility for building the world they want to inhabit and share. But at some stage economic and social demands need to be translated into political proposals that are agreed and implemented. The decision by pro-corporate politicians to encourage young people to see themselves as individualist consumers means that they have no tools, education or experience to make this next step. I am not seeking to criticise young people finding their own way of doing politics; in fact, I am rather excited about it. I am looking forward to discovering what they will propose.

The basic pattern of the politics I understand is threefold:

My own history of activity in the Green Party has convinced me that the second two requirements of a functional democracy are not working in the UK and many other countries. But for the young people demonstrating on the world's streets I think their problem lies more with the first requirement. I was alerted to this by watching the BBC3 programme Free Speech. Aimed at the young and politically disengaged, it assembles a panel of celebrities to make a political case on a certain topic. The panel is mixed between celebrities from various walks of life one of whom is probably a politician. Ok, I was feeling pretty snobby about the facile comments made by pop stars about revolving world poverty or tackling the civil war in Syria, but this was not the main problem. What got me really concerned was the way the audience was encouraged to celebrate entirely inconsistent proposals.

The result of this approach to politics is a world where young people feel disgruntled and take to the streets with a bewildering array of demands that cannot all be accommodated. While it makes sense to demand new shoes and a new sofa and a mini break to Venice - the only limit being the plasticity of the credit card - this simply is not true of political demands. If we abolish tuition  fees we will need to raise taxes, cut other spending or engage in some radical monetary policy; if we  fly more then we will need to cut our carbon emissions in another area. Politics is the art of the possible precisely because the skill lies in mediating conflicting demands rather than accepting then all. And of course this is all so much easier if you have an ideological  rudder and an organised and trusted party structure to undertake the negotiation. Dilma's request to meet the demonstration's leaders may be disingenuous, but perhaps, being of the same generation as I am, she has simply not caught up with the idea of a leaderless demonstration of discontent.

No doubt politics-as-consumption seemed very smart to Edward Bernays and his ilk, whose attempts to merge the worlds of advertising and PR with that of political debate and citizenship were dissected by the TV series The Century of the Self. They were reactionaries, concerned about the radical nature made by newly emancipated citizens, and fearing that open democracy would lead to alienation and chaos. I hope to be proved wrong, but it seems to me that the mobilisation of those who have grown up to demand three mutually incompatible things before breakfast faces politicians with a more challenging task than ever. I am waiting to see how the demonstrators devise their own way of turning their demands into a legislative platform that can change their society.
.
Tweet
Posted by Molly at 10:28