There are No Borders to Democracy


A guest post from Rodrigo Silva de Souza, originally from Salvador de Bahia and currently studying for a PhD in London

The recent demonstrations in Brazil began completely unexpectedly and took local and global commentators entirely by surprise. Why should a country that is experiencing its best greatest economic success for a generation, that has addressed its historic problem with hyperinflation and become the sixth largest economy in the world, and which is almost simultaneously hosting the World Cup and the Olympics Games, be faced with such a degree of popular unrest? Considering that football is a national passion, why should the people revolt against their government with demonstrations of popular dissatisfaction inside and outside its frontiers?

The answer lies in the paradoxical model of growth and progress that Brazil has adopted. In spite of being the sixth largest economy in the world, Brazil is also the third most unequal country, with a Gini coefficient of 0.56 (UNDP, 2010); graphic thanks to The Economist. So, although local newspapers want to link current events to the minor issue of an increase of just R$ 0.20 (6 pence) in the standard bus fare, the explanation for the huge scale of the demonstrations clearly lies elsewhere.

Those 20 cents were merely the last straw. People are suffering from corruption; urban violence matched by a failure to enforce the law; the largest rate of tax amongst undeveloped countries without a commensurate standard of public services such as education, health and public transport. Brazil’s popular fear a return of inflation and resent the high salaries of politicians (averaging R$ 17,000.00) compared to the wage of a minimum-wage worker (R$ 600.00) or a teacher (R$ 800.00). The doubling in the cost of the new stadia being built for the World Cup has exacerbated dissatisfaction.


In a country renowned for its peaceful and welcoming people, the national mood is ‘they do not represent us’. Since the period of the dictatorship Brazil’s media has been biased and corrupt, and it now shamefully tries to manipulate the population, conveying the protests in Turkey as ‘revolutionary acts’, while protests in Brazil were reported as ‘vandalism’. Meanwhile, the police tried to quell the demonstrations with excessive violence used against nonviolent protesters who carried flowers through the streets of Sao Paulo’s with banners proclaiming ‘no violence’. They were met with tear gas and rubber bullets.

The movement was dispersed momentarily, but what the rulers did not realize was that images and videos, never conveyed by the official media, would be shared on Facebook, and people would not allow the football to distract them from their political purpose. The movement took to the streets of Brazil and has been supported all over the world. The Brazilian people have seen through the illusion of democracy they have been living through and shouted ‘ENOUGH! We are tired of being spectators watching the farce of life in Brazil!’

As a Brazilian I have to say that I have never felt so proud of the Brazilian people. I do not know exactly how far these manifestations will take us, and they cause me anxiety, but I think this is an important first step towards a better future. ‘No more impunity! No more corruption! Change Brazil! We want a better future for our children!’ These claims have invaded the web and the streets of Brazil. 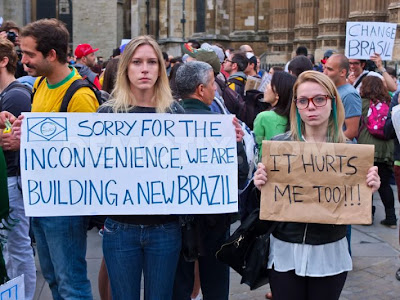 On Wednesday I joined several friends and linked up with Brazilians across the world to support the protests and proclaiming that ‘although distant, we are not apart’ and that there are no borders to democracy. Unfortunately, many things needs to change. The fear is that politicians will silence the resistance in Brazil in a subtle and therefore more threatening way: attending to one or two of the movement’s shallow demands requirements, such as the bus fare reduction, and the movement disperses.

These political demonstrations have been observed with suspicion by a part of the population who no longer believes in change and in their power. Moreover, the official media continues to convey images of graffiti and vandalism of some protesters (who are, according to the leaders of the movement, government and police infiltrators). Thus, comments like ‘Why are we doing this now?’, ‘But we always hear news about corruption and thievery’ or ‘Brazil has never grown so much’  illustrate the identity of a people who have learned to be content with small rewards and no longer recognize their strength.

The important thing is that the people are dissatisfied and have perceived that nothing has changed even after a huge demonstration of public opposition, even when they have reached Congress. A prominent example is Renan Calheiros (a corrupt politician who has become President of the Congress): he is still in post in spite of a Facebook petition signed by many thousands. We have been battered again and again for too long. For me personally the overpriced World Cup was the last straw, for the residents of Sao Paulo it was the 20 cent fair rise and police violence.

This current Brazilian democracy is nothing more than an illusion of people power. Even after the demonstrations, absurd laws continued to be approved in Congress to satisfy the lobbyists working for large companies. FIFA has already overpowered the democratic government of Brazil in arrangements for the World Cup: the streets near stadiums are recognized as FIFA territory within Brazil. Moreover, every politician and minister now receives the benefit of a ‘Cup Assistance’ to watch the World Cup games, which costs the equivalent of a working person’s montly wage for each day for each politician who attends the World Cup and is paid for from taxes.

In spite of all this, I have hope in the future and the possibility of change. Democracy is not made only on polling day or during the election period. It will be good for Brazilians to become more politicized, because for so long we have been led to believe that politics is dirty word and we should keep ourselves far from it, and this is just one more discourse to maintain the domination of the rich and powerful. I have hope if the people stay on the streets and show their strength; if they demand that the media broadcast these demonstration or, better still, if they take control of social media to proclaim: ‘Yes, we can change!’ That is the reason I was here demonstrating on the streets of London yesterday.
.