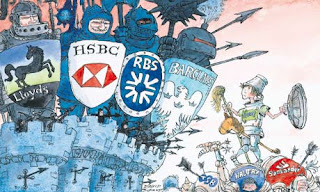 I was glad to be able to host Peter Pannier's well-informed explanation of the travails of the Co-operative Bank. Since I have spent years recommending on this blog and in public talks that people shift their bank accounts to 'the co-op' I feel a responsibility for its failure. For me, criticising any part of the co-operative movement feels like attacking a member of my own family and I am well aware of the glee with which capitalist apologists are greeting the bank's problems. But if the advantage of mutual economic is our genuine ownership the along with this comes a responsibility to be questioning and critical.

Which brings us to the nub of the problem. Peter Pannier's data demonstrate to my satisfaction that bad decisions were taken by Britannia executives which led to the crisis of solvency. It was exacerbated by the financial crisis but was vulnerable before. Like the managers of other mutuals, at Britannia the directors seem not to have understood the market they were involved in.

I am still left questioning why the credit-rating agencies condemned the Co-operative Bank because of the weakness of its lending against commercial property when they have not done this to the other banks who are holding loans to businesses that are effectively bust and whose collateral has lost so much value since the beginning of the recession that the loans are bound to be bad.

A second question: if the control of the Co-operative Bank now passes to shareholders, as the result of a grand-scale debt-for-equity swap, is it worth continuing to hold an account? We are promised that ethical standards will continue but if your motivation is to avoid the extraction of value by the holders of capital you are left with a difficult decision.

In trying to see the bright side to this gloomy news I am left asking whether it offers evidence of solidarity that you would hope to find in the mutual sector. Just as with the collapse of some of the building societies, which were absorbed by others, the decision to buy the Britannia was argued at the time to be about gaining access to the High Street, but was it really about supporting a mutual in trouble? If not, one is left with serious questions about the quality of the due diligence that was undertaken.

You might also argue, a a pinch, that the solution announced earlier this week is based on self-help. The movement has come up with a plan that avoids government involvement, although it reduces the proportion of the bank that can still be considered 'co-operative'. Many of the bad decisions made by co-operatives and mutuals, especially their excessive borrowing from financial markets, resulted from an attempt to compete in a capitalist market, which is always a weakness of the idea of co-operation within capitalism.

But even these reasons to be cheerful cannot conceal that we are losing a bank that has been part of the co-operative movement for 150 years. As capitalism's crisis slouches on, this seems to be yet another example of how it is sheltering its own while the interests and institutions of working people are being sacrificed.