Is the US About to Default? 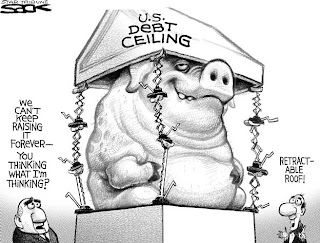 There was just too much going on in the IMF report I blogged about yesterday to cover it all. However, one of the most interesting paragraphs is the following:
'The third advantage of the Chicago Plan is a dramatic reduction of (net) government debt. The overall outstanding liabilities of today’s U.S. financial system, including the shadow banking system, are far larger than currently outstanding U.S. Treasury liabilities. Because under the Chicago Plan banks have to borrow reserves from the treasury to fully back these large liabilities, the government acquires a very large asset vis-à-vis banks, and government debt net of this asset becomes highly negative. Governments could leave the separate gross positions outstanding, or they could buy back government bonds from banks against the cancellation of treasury credit. Fisher had the second option in mind, based on the situation of the 1930s, when banks held the major portion of outstanding government debt. But today most U.S. government debt is held outside U.S. banks, so that the first option is the more relevant one. The effect on net debt is of course the same, it drops dramatically.'

The report also suggested a buy-back of private debt, the other side of the debt coin that is holding back the global economy.

What is the explanation for this extraordinary change of heart, if not yet of policy? Could it be that the US acknowledges that its debt, both public and private, is simply unpayable? However great the temptation to return to the lure of further borrowing, eventually states as well as individuals must adjut that they are bankrupt. But the US has grown rich on producing debt that has been bought by other countries, and those at the top of the pile have grown the richest, fastest. There must surely be a price to be paid rather than letting the financiers and those who have gambled with them slope off to their mansions in the Hamptons.

In an earlier paper I suggested that a default of the largest sovereign debtors was inevitable. I proposed that the price the world might extract would be to implement a new global currency regime that uses carbon as backing for the global trading currency. This would allow a fresh start but would limit the consumption of all countries to a level that is environmentally sustainable and will allow us to avoid frying the planet.