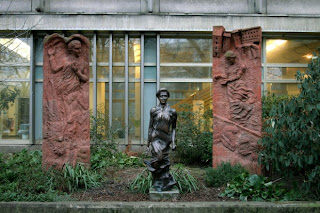 I am spending the weekend in Berlin as part of an expert group exploring creative and just responses to the financial crisis, funded by the Rosa Luxemburg Foundation. As a Green, this is an interesting experience for me: finding out where the radical left are on the issues of the day. Most encouragingly many amongst their number are recognising the ecological crisis as the defining issue of our times and considering how this might be taken into their worldview and political platform.

The most stimulating contributions have been from the Greek delegates, two of whom are contributing to the policy of the Greek left coalition Syriza. Greece is portrayed as a laboratory for the next phase of rapacious neoliberalism, with the debt crisis being used to facilitate the fire sale of valuable national assets, including the large amounts of land that is owned by the state in Greece. In such a situation default can seem like a liberation. As charmingly argued by Sergio Tzotzes from the University of Crete, 'The sinking of the titanic was an unexpected liberation for the lobsters in the kitchen of the luxury liner.'

As the first default under EU rules, it is important that we study the conditions that were placed on Greece, which were notoriously draconian. Greece defaulted to the extent of €105bn on an original debt of €360, but new loans of €130bn were taken on, meaning that Greece was immediately in trouble again. Worryingly, these agreements have not been passed democratically by parliament but rather signed off by ministers. As the price of this restructuring there was a devaluation of pensions and savings of 90%. This was a default on the private debt, leaving the public debt unaffected. The default was governed by British and Luxemburg law, which is creditor friendly, and the terms imposed by the EU were more savage than have traditionally been imposed by the IMF in similar situations.

My own contribution to the seminar was about moving towards a diversity of forms of money operating at different levels with different objectives and under different forms of control. I think it fair to say that my proposal was roundly condemned. Marxist theory says that money is a commodity like any other and that it is the productive economic that is primary: money will follow decisions made about production. To me this directly contradicts the evidence of recent years and undermines attempts to tackle the way money enables the tiny minority who control money to use this power to also control the key productive and consumption resources.

The Left feels like a rump of something that was once exciting and dynamic. I am surprised by their friendliness to somebody who is basically an interloper but I do find them labouring with some dogmatic ideas that hold back creative thought, especially in terms of solutions. It is important to remember, though, that while it is the machinations of the neoliberals that have brought us to this mess, it is the weakness of the organised left that has allowed them to get away with it. I am not nostalgic for the 1970s but I do recognise that it was the withering of the Left since those years that has permitted the downgrading of my job and attacks on our public sector.
. Tweet
Posted by Molly at 07:06