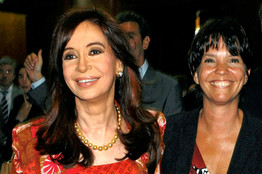 The most successful challenge to the global domination of neoliberalism has been slowly maturing in Latin America. The latest development is an interesting coalition between two women in powerful positions where you might least expect. In Argentina, where stereotypes suggest the men rides horses and the women are pushed around the dance-floor like shopping trollies, the female President and female head of the Central Bank are cooking up a distinctly different monetary policy.

The banker, Mercedes Marco del Pont, has recently achieved the rare accolade of being voted 'worst central banker in the world' by the lackeys of the financiers. Her sin appears to be balancing the needs of the Argentinian people with those of the finance sector. She is refusing to have the sole focus on inflation that the IMF demands and has annouced that financial stability, employment creation and economic development with social equity will also be objectives of monetary policy.

Somewhat predictably Christine Lagarde, Managing Director of the IMF threatened Argentina with a 'red card', to which President Cristina Fernandez de Kirchner responded 'My country is not a soccer team. It is a sovereign country and, as such, is not going to accept a threat.' Last time we caught up with Argentina on this blog, they were celebrating their liberation from debt-based financing, and  reclaiming their right to the value of the country's resources. Wray updates us: the recent poor weather has threatened both of Argentina's main exports: soya and beef. This helps to explain the inflation problem that the central bank is facing, but so far the political and monetary sisterhood in Argentina is holding firm.

This story is based on the account of Modern Monetary Theorist Randall Wray; he tells the story in greater detail on his Economonitor blog.
. Tweet
Posted by Molly at 12:18