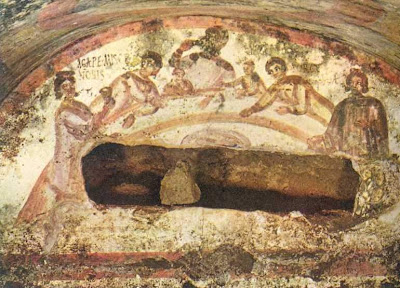 I was recently invited to a Diggers Agape in Gloucester, which, as well as (or perhaps because of?) being the place where Harry Potter was filmed, appears to be the world centre of radical vicars. This sounded like such an esoteric event that I had to find out more about the idea. Here is what Simon Topping, who I believe to be a man of green cloth, although I have never seen him in a dog-collar, had to say about how the idea came about:

'There were three main influences behind the idea. Firstly, as you might imagine, I was influenced by the writings of Gerrard Winstanley and his central idea that “the earth was made by Almighty God to be a common treasury of livelihood for whole mankind in all his branches, without respect of persons.” From this starting point Winstanley goes on to reject the practice of “buying and selling” because no-one can buy or sell what is (or should be) held in common. Hence our idea for the Diggers agape that people should only bring things that have not been bought or sold.

'The second influence is the Christian idea of “koinonia” which is often translated as “fellowship” but, in many of its usages within the New Testament, actually implies material, economic sharing. This “koinonia” was put into practice through the early church’s community of goods in Acts 2:43-7 and 4:32-5 and through the collection of funds by Paul for the impoverished church in Judea (2 Corinthians 8:3-4 ff).

'Finally, the tradition of the “agape” or Love Feast (a non Eucharistic shared meal) has its roots in early church practice (Jude 12) but was revived by the Moravians and by John Wesley, the founder of the Methodist Church to which I belong. Agapes, though now infrequent, do still feature as an element of Methodist church life.

We had the first Diggers Agape in January this year and a second in April with about twelve people attending each one. Amongst the many and varied things which people have brought we have had spring water, nettle soup, elderflower cordial, a road kill pheasant(!), hawthorn and dandelion salad, hazelnuts, parsnip and apple soup, poems, stories, shells, a rendition of the Diggers’ song, a rewriting of Woody Guthries’ “This land is my land” to make it relevant to Gloucestershire.'

This all sounds too good to be true and I shall have to scour my garden, or gutter, for suitable produce for the next eucharistic love feast. Perhaps you could start something similar where you live? Tweet
Posted by Molly at 13:00