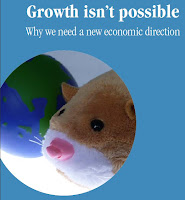 I spent yesterday evening at the launch of the second Zero Carbon Britain report, a second edition of the report again produced by the Centre for Alternative Technology, this one intended to frame our transition to a climate-friendly society by 2030. There is lots of good stuff here, with detailed plans for the obvious areas like built environment, transport and energy, and more on the less obvious areas such as agriculture, motivation and policy than the last time the report was put together.

I was invited to contribute to the economics chapter, which was an additional area, but I am sorry to say that none of my contributions seem to have made it into the report. One reason for this is that the cultural home of Zero Carbon Britain as a study - and even as a concept - is the rather tecchie world of modelling and gadgets, a world where my approach must seem rather girlie. The deeper reason is that the report was intended to influence government, and it was therefore self-consciously set within the existing paradigm.

My question to the report's writers is: can we have a Zero-Carbon Britain unless we have a Zero-Growth Britain. In spite of the fact that the job of writing the economics chapter was delegated to nef, and they have clearly stated elsewhere that a steady-state economy is a prerequisite of sustainability, this question caused some confusion at the launch and is not adequately addressed in the report. A decision had been made to frame the report in terms that parliamentarians would feel comfortable with, so the growth paradigm was left unchallenged.

Economics is an expert field, perhaps even a field whose jargon and mathematical symbols operate like a 'Trespassers will be prosecuted' sign, but it is desperately important that those who would propose sustainability policies in any area have a basic level of economic literacy. There is little point in talking about changes to housing, energy or transport without stating simultaneously that all these changes will be irrelevant if we continue to live in an economic system that requires growth in order to survive.

The report was launched at the first meeting in this parliament of the All-Party Parliamentary Climate Change Group, a group who include E.On and Royal Bank of Scotland amongst their membership. I am sure that both will find opportunities for making profits from the sort of move towards a zero-carbon Britain that the report proposes, whether as installers of massive new energy grids or the providers of the capital for the same. For my money, the Steady-State economy conference in Leeds on Saturday has more relevance to our species' survival on this planet. Tweet
Posted by Molly at 09:45