The class war has been launched, and not by the Labour Party. Cameron's speech today sets the scene for a principled stand in favour of the interests of his owners rather than earners. This should be greeted with no surprise - why else was he elected in the bungled events of last month? Certainly not on the basis of his charisma or incisive intelligence. This speech will be followed up by attacks in the media on the plans for strike actionsby working people defending their living standards before these have even be discussed much less voted through.

The political implication is that the public sector has enjoyed massive investment during the Labour years and that it will now pay the price while the private sector and the interests of capital see their just returns. The problem is that this is an outrageous untruth. My argument rests on the two pictures that are included with this post. Between them they demonstrate how the need for the shocking levels of public borrowing arose and where that money was spent. 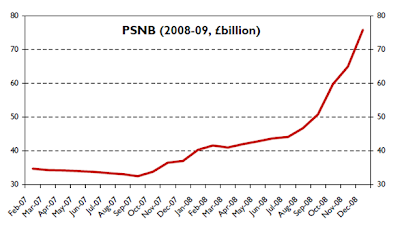 The first graph demonstrates perfectly how we got into this mess by tracing public-sector borrowing from February 2007 to December 2008. It shows the steep rise that followed the banking crisis when our money was extracted in various ways to prevent the collapse of global finance. We didn't cause this, we didn't benefit from it, and yet the graph shows clearly that we paid for it.

The second graph shows the same variable - public sector net borrowing - between February 2009 and April 2010. If you compare the graphs you can see that we are on a totally different axis here. Annual borrowing of £35bn. in Feburary 2007 had, by April 2010, been massively increased to £160bn. This is not the result of pointless spending on government bureaucracy, or the overpayment of nurses and teachers, its precise location in time makes clear its origin in the bank bailout. 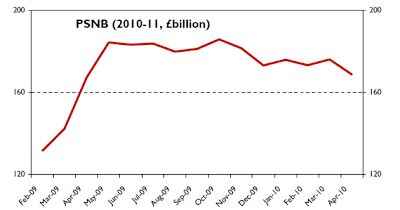 Perhaps as some sort of weak demonstration of honesty to justify his claim to have introduced a new type of politics Cameron does, in a subtle way, identify where the money went:

'The global financial markets are no longer focussing simply on the financial position of the banks. They want to know that the governments that have supported the banks over the last eighteen months are taking the actions to bring their own finances under control.'

This implicit admission of the massive transfer of value from public to private, from us to them, and the corresponding transfer of their debts to our public balance-sheet is the real political issue here. It is vital that working people defend their interests, and most importantly do not follow the divide-and-rule strategy that the attacks on public-sector pay suggest will accompany the inevitable summer of discontent. Tweet
Posted by Molly at 12:09