Time to Create the Renten-Euro? 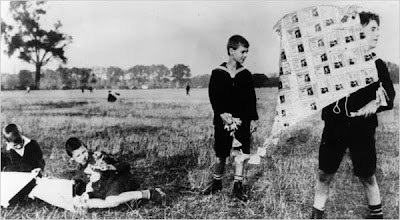 Why do currencies fail? If you did not know any better you would assume it was because the people in the countries supporting them became lazy and demanded free plastic surgery at a moment's notice while spending all their days reclining in the sun enjoying a view over the Agean. Or some other scenario we can enviously imagine while stuck at our computers in the summer rain - us and the Germans we share our northern Atlantic climate with.

It was not so long ago that we were looking at this same scenario from the other end of the telescope. The narrow focus on the Second World War in UK history teaching means that many of us have a strong mental image of the collapse of a European currency, with the useful visual mnemonic of hungry shoppers trundling a wheelbarrow full of notes to the local bakery. The whispered suggestion that the Euro may have lost credibility to the extent that it be replaced by a new currency (as the Mark was replaced by the Rentenmark in 1923) makes clear the parallel with that period of German's history.

The most unhelpful talk of punishment should bring this image to mind, because nobody suggests that the German hyper-inflation between the wars was the result of the burghers setting up their deck-chairs along the Rhine in the hope of catching a bit of sun. We all learned, and we should remember now, that the German economy was destroyed by the demand for an unrealistic level of reparations. Punishing Germany for its economic woes, as many are suggesting we should punich Greece now, destroyed its currency and allowed space for fascism to flourish.

The CIA have helpfully compiled a list of the countries of the world ranked according to the size of their debts as a proportion of the GDP. I have no idea how reliable this data is, but surely the more important point is that so many countries have these debts. This suggests that there is something structurally wrong with the system of national and global financing, rather than the demand of people the world over for a decent life, or their willingness to work a reasonable amount of hours to achieve that.

The system of creating money as debt should be our target: for creating instability, and for permitting the extraction of the value of work by those who do none. If we are seeking targets in deck-chairs, those who live from rental earnings of their financial investments would be a good place to start. Tweet
Posted by Molly at 08:31