Electoral politics has been moving along the path towards Baudrillard's simulacrum for a number of years, with a growing sense of unreality and the increasing resemblance of party leaders to characters from Thunderbirds. We have now reached the final stage where, as Baudrillard put it, the simulacrum masks the absence of the reality. The more we hear about choice and change the more we know that things will stay the same and that the distance between the parties we see performing is smaller than ever.

What the Nick Clegg phenomenon demonstrates is the way that the forces of the corporate media totally control our political system.* I have seen this impact in a devastating fashion on my own party, so that we tailor our message and our internal structures to fit into the corporate vision of Britain. It was the decision to include Nick Clegg in the TV debates, so that voters finally learned who he was, that caused the increase in his vote. Had Caroline Lucas or Nick Griffin been given airtime the effect would have been the same.

And what about the policies? Listening to the election coverage is little help in working out which party is proposing the sorts of changes that you might actually wish to vote for. When they are given that opportunity, as in the Vote for Policies website, their selection is quite distinct from what we see in the closed, forced-choice questions of the pollsters. 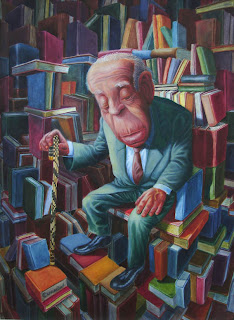 Perhaps the greatest evidence that our democracy is now little more than a sham is the way that the forms of democracy we impose on Iraq or Afghanistan are designed to more accurately link the wishes of the people of those countries with the political power exercised on their behalf than is the system we labour under here.

The Wikipedia entry on Baudrillard's work refers to a story by the superb Argentinian author Jorge Luis Borges called 'On Exactitude in Science'. An oppressive and obsessive empire decides to map its territories at an exact scale, so that the map becomes as large as the territory itself. When the empire crumbles only the map is left. In a similar way, a closer look at our self-proclaimed mother of parliaments reveals it as a crumbling ruin.

*An article in today's Guardian suggests that the Murdoch strategy of deliberately sidelining the Liberal Democrats may backfire Tweet
Posted by Molly at 08:26