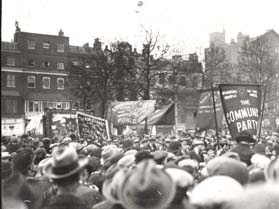 There have been many posts on this blog over the past couple of years detailing how the financial crisis has resulted in a massive transfer of wealth from ordinary working people to those who live from their cash. This year will be the time when we have to become political about changing that, and the platforms of the 'three main parties' in the upcoming election make clear that they will all be on the same side.

The media debate moved swiftly on from the horror over the £800bn. bailout to the necessity for public-spending cuts. Little attention was paid to the arcane and obfuscatory policy of quantitative easing. But by creating money to buy debt from financial institutions it was also a policy that allocated national value to the investment community.

While the media analysis has been deficient and much of the detail of the financial wheeling and dealing has been impossible to understand, most people in this country have a deep and lingering sense that they have been scammed. Once the election charade is over and the cuts begin that unease will turn into anger and action. Those of us who work in the public sector will have an active role to play.

I grew up in a household which had two rules that I have passed on to my children: don't tell lies, and never cross a picket-line. When I was younger and in the mood to question anything, I wanted to understand the ins and outs of every example of industrial action - this was the 1970s, remember, so there were plenty to choose from. My grandfather, who had seen Keir Hardie as a boy in Merthyr and remembered the General Strike, explained that nobody goes on strike lightly.

Now I have had my own experience of strike I know that this is true. There is exhilaration about taking power back into your hands, but also fear about losing your livelihood and knowledge that you will find it hard to manage without that week's, month's or even year's money. If workers are on strike you can assume they have good grounds; my own view is that it is therefore your duty to respect their decision and show solidarity. There is likely to be plenty of opportunity in the coming year.

And on a more personal level I pass on some advice from my comrade, 'radical uncle', and ex-boss Len Arthur. You can never really call yourself an activist unless you have a strike fund. Those of us working in the public sector are paid well and have the advantage over the strikers over the 1926 general strikers that we can put something away in preparation for a time without pay. I would recommend building up a reserve of about a fifth of your annual salary. And if we protect the public sector without the need for strikes, we can all have a big party to celebrate. Tweet
Posted by Molly at 09:49