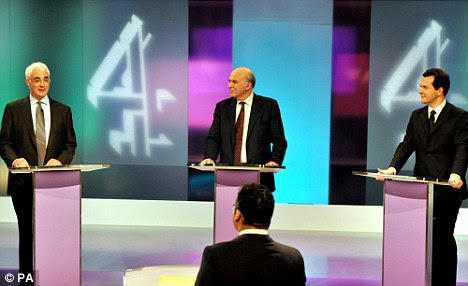 The Chancellors debate was even more disappointing that I had anticipated. Perhaps I should be thankful that we were in the middle of a digital switchover debacle so the wise words of Alistair and friends were lost in an analogue wilderness somewhere between the Wenvoe and Mendip transmitters.

There were several examples of mislabelling that George Orwell would have been proud of. First, the idea of a debate, which surely should involve some element of fundamental disagreement, honestly explored, and with progress towards a resolution? What we saw was rather a performance, each man presenting a show of confidence that his obvious nerves revealed as dishonest. Each offering defensive responses intended to maintain face. The underlying premise of the debate was that capitalism works, an assumption that flies in the face of the financial catastrophe of the past few years, not to mention the environmental crisis that has been accelerating throughout the past several decades. Without this question being put, the whole event was revealed as a charade.

Then there was the fact that it was called 'Ask the Chancellors'. This seems to chime with the widely held, although deeply misguided, notion that believers in the catechism of neoclassical economics have anything useful to tell us about sorting out the economic mess we're in. These are the guys who learned this orthodox faith at university: it is hardly likely that they are going to be the ones to trace the path towards a stable and sustainable future.

Meanwhile the masochist of the year competition continues. Our three would-be chancellors are now wishing to match their prowess against Madame La Guillotine herself: putative Iron Chancellors competing with the Iron Lady. This is an embarrassing public display of posturing that does nothing to address the question of how we protect the vulnerable in our society in a situation where the economic system we have signed up to has allowed the money they have earned and the value they have created to be stolen from them. 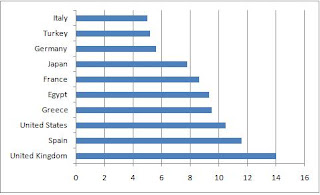 All three must have seen the figures that will confront the person who actually walks into 11 Downing Street on May 7th. The graph illustrates how The Economist sees the situation (it illustrates the ratio of debt to GDP for a number of countries). These data were derived from World Bank sources. They seem to bear little resemblance to what the UK is reporting to the EU and offer no justification for the singling out of Greece for a particular beating by the foreign exchange markets. Given that these figures do not include either our private debts or our off-balance-sheet debts, it is a miracle that the pound is still trading at all Tweet
Posted by Molly at 09:40