Return of the Politician? 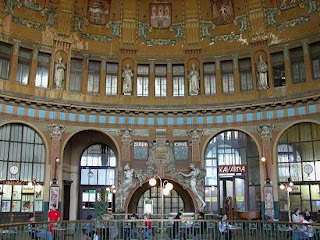 I have just returned from my annual jaunt to teach green economics to students in the Czech Republic. At first I was rather smug about my decision to travel by train, but as soon as I reached Prague central station (which is stunning, incidentally) I realised how Iceland's second world-beating catastrophe in as many years would affect my own travel plans.

The station was full of the sort of people who never normally travel by train. In contrast to the comfortable leisure wear of those of us who routinely use sleeper trains there were tanned women in high heels and middle-aged and unfit travellers with massive suitcases. It was also easy to distinguish those displaced from their accustomed first class exclusivity. Men with the appearance of gangsters and large expensive coats looked sweaty and dislocated.

The culture of individualism that must be a key characteristic of the frequent flyer in these days when the link between climate change and air travel is so clear was predominant. The train from Cologne for which I booked my seat a month ago could not leave because so many without reservations had mobbed aboard. Deutsche Bahn have strict rules about overloading, but clear instructions from the guard that only those with reserved seats could travel were repeatedly ignored.

On arriving back in the UK I was greeted by untypical weather and an equally untypical debate on Any Answers about why the PM had not rapidly set up an emergency cabinet to devise a plan to return citizens to the country. This left me baffled: the individuals who have chosen to spend weekends in Amsterdam and enjoy three long-haul flights every year did so via a market system. You pays your money and takes your choice. Their choice did not pay off this time, but I fail to see how this can possibly have anything to do with a politician.

Are these people perhaps wishing for the return of nationalised air and rail systems? In such a world, there might be some action politicians could take. But in this world of private enterprise we are left to the tender mercies of Willie Walsh. If he decides to restart flights it will be profits rather than pity that is the motivating factor.

If voters are seriously tiring of the limitations of a market world, they might do better to call for the return of political control of the financial system than the transport system. As Mary Mellor argues in her excellent new book about the financial crisis, the reality was always that money was a social construct supported by political will. The power to reorient the monetary system towards the interests of people and planet has always been ours. If we seek politicians with the courage and vision to begin to act rather than merely manage, finance would be a good place for them to start. Tweet
Posted by Molly at 07:43