Putting Capitalism in its Place 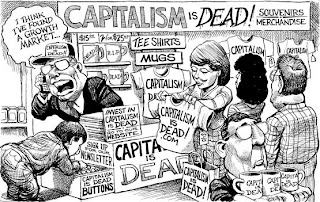 Canvassing is always a salutary experience since it teaches you that people are far smarter than the pundits give them credit for. This reminds me of my once-held belief that we would be far better off if we engaged in some sort of periodic job exchange scheme, where every ten years or so our politicians would become hairdressers and vice versa. Except for the quality of our haircuts of course.

This morning, while waiting in a queue at the cashpoint, I had a very interesting conversation with a local voter. He was critical of politicians' reluctance to admit exactly how much our public services were going to be cut. I responded by pointing out that, had we not experienced an extraction of value to our banking sector, we would not be needing to cut at all.

My mention of the word 'capitalism' was not well-received. I had to explain that I was not for a centrally planned system where every bicycle would be made in Conventry and sold through a state-run and utilitarian shop. My concern was rather that capitalism should be pushed onto a socially benign path. Here we were able to agree.

Capitalism needs to be contained within social limits. If the prevailing economic system benefits only a very small proportion of the citizens of a country - or of the world - than that system clearly needs radical revision. Although I might style myself as 'anti-capitalist' it only takes a few moments to consider the history of societies where social ownership is ubiquitous to realise that we may not be ready for that yet.

It seems to me there are three criteria which we can use to examine whether a capitalist business is socially acceptable: its size, the scope of its activities, and the extent of its profits. All three can easily be enforced by a just taxation system combined with an effective Office of Fair Trading. And our economy would also benefit from greater diversity, so that there were more social businesses, social enterprises, and co-operatives.

However, the economic system that dominates the UK in 2010 is not capitalism in any recognisable sense. It is a financialised system of exploitation where, rather than using money as a medium of exchange to facilitate the exchange of goods, a tiny minority are using money corruptly to extract the overwhelming majority of the wealth of the world for their private enjoyment.

My cashpoint friend seemed reluctant to consider how the monetary system might be used to suck our money out of us, so that we will face losing the services we value and the quality of the society we share. The issue feels too big; most do not have the courage even to consider it, much less to dare to argue for something better.

We should resist the intimidating behaviour of the masters of capital, whether exercised in print or via credit-rating agencies. Capitalism is not working: we deserve something better. Just because these issues are not raised as part of the election campaign should not lead us to think that we have no right to debate them. Tweet
Posted by Molly at 14:14