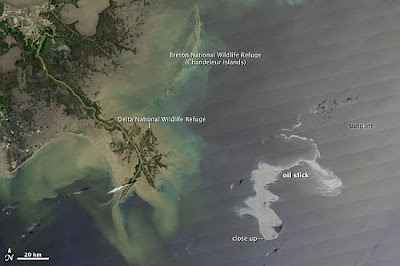 BP, as we observers of greenwash remember, was aiming to go Beyond Petroleum. They were the oil company that was going to take us to the grassy, solar-powered uplands. As a massive slick of crude oil makes its way ineluctably towards the precious natural havens of the Mississipi delta this claim, admirably dissected and dismantled by Sharon Beder, seems more insulting than ever.

Pundits have pointed out how, in the world of banking, the profits have been privatised but the costs, whether financial, social or environmental, remain with the public. Now we see exactly the same in the case of the oil industry. Two days ago, Shell announced that its annual profits were up 50% on last year a result, according to the BBC, of rises in crude oil prices.

This implies that there is a market for oil like there is a market for shoes, where if one company charges too much, others will rush in and set up a network of oil-rigs and petrol stations and offer us their wares at a reasonable price. Whether it is a formal cartel or merely an informal oligopoly, it is clear that the oil market is controlled by producers not consumers. BP's profits for the first quarter of 2010 nearly doubled: up from $2.4bn. to $5.6bn. compared to the same period last year.

The disaster in the Gulf of Mexico has been compared with the foundering of the Exxon Valdez tanker in 1989. Following that natural catastrophe, while seabirds, fish and seals struggled for breath, Exxon's lawyers struggled to string out the legal process and minimise the size of the fine. The case reached the Supreme Court two years ago, where Exxon successfully appealed against the earlier £2.5bn. fine for damage to the Alaskan environment. The final paltry sum of £500m. for punitive damages represents a small proportion of Exxon's annual profits and a drop in the ocean of the company's earnings.

A green economist should have no particular inclination towards public ownership of either the means of production or the commanding heights of the economy. However, it does seem that some aspects of a complex economy are simply too important - and too potentially destructive - to be allowed to remain subject to the rapacious instincts of the market. Banking has clearly shown itself to be one; energy must surely have a strong case to be another. Tweet
Posted by Molly at 08:37