Once More Unto the Brink? 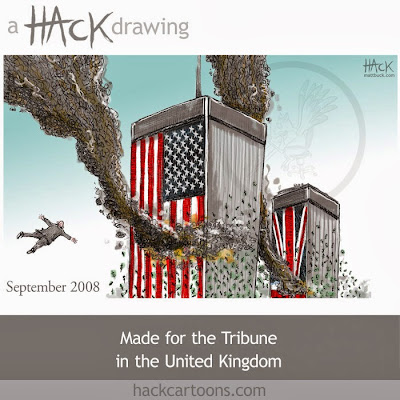 The world has fallen silent on the issue of the financial collapse. This blog included, interest has moved elsewhere. Perhaps we are all hoping that we can take a summer holiday from the credit crunch?

Mervyn King, to his credit, is persisting with his doggedly conventional view that public borrowing of the level that we are seeing it is unsustainable. Intermittent but persistent warnings filter through the media - real news occasionally penetrating the celebrity gossip columns that our newspapers and radio programmes have become.

A recent article in the London Review of Books gives a thorough and lengthy account of the crisis, and shares my uneasy sensation that we are pausing for breath rather than breathing easy. The debt crisis has not gone away. Some portion of the debt has been pushed onto the public and out of the private sector. And with our money we have bought insurance that the rest of the debt will be repaid from future economic growth. Growth on the scale to make this bet pay off is unimaginable - even if it didn't signify the death of the planet.

Lanchester has calculated that the money given to banks so far means that each UK household is in debt to the tune of 160% of its annual income. He concludes that debt on this level is quite unpayable and goes as far as suggesting that capitalism - as a system - has failed. This is, presumably, why this message arrives via the London Review of Books and from a novelist, rather than in the American Economic Review and from an economist. (Lanchester extended version of the analysis - a book called Whoops! - is eagerly anticipated.)

The big lie that is circulating at present, and that we are all working hard to believe through various denial and displacement strategies, is that we stared into the abyss and stepped back. A financial crisis threatened but, through paying a huge price and now through working hard in future and tightening our belts we can get through this.

The problem is that this just ain't so. The crisis has been postponed not resolved. As Lanchester puts it the policies adopt are 'not so different from dressing up in a costume and dancing in a circle praying for the intervention of the Market Gods'. The marketeers and their politicians have reached that mental double-bind that leads to insanity. They cannot solve the problem without accepting that capitalism doesn't work. Tweet
Posted by Molly at 18:45