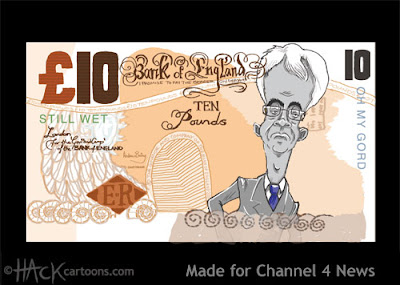 Alastair Darling's Mansion House Speech last night was intended to be the last word on the financial crisis and that word is: complacency. Apparently there is nothing wrong with the system of banking regulation. The intervention by the Mervyn King indicates that, for once, there is a split between the economists and the politicians: Darling dare not challenge the power of the banks, but King recognises the danger of their supreme power in the economy.

There is an important sense in which the Darling of the city is right: regulation is not the point. The banking system was designed to enable a small number of people to profit hugely from the economy while the rest of us labour for a shrinking share of resources. The system of regulation did nothing to prevent that; but then it was not intended to. The boom and bust that has been so spectacularly played out over the past year is not a temporary aberration; it is symptomatic of the economic system we live under.

It can't be a coincidence that Obama ,made his announcement about changes to the regulation of the US banking system on the same day. And here we see that, contrary to our preconceptions, there is a stronger sense of resistance to corporations (or 'trusts' as they were historically called in the US) on that side of the Atlantic. The attempt to begin to control the derivatives market is a small gesture in the direction of actually retaking political control over this most wayward section of economic life.

The cause of the financial crisis was the absence of any sort of democratic control, any representation of the views of the citizen, in the banking sector and this has remained unchallenged. Neither the FSA in the UK nor the Fed. in the US has any accountability to citizens. This is internal regulation within the financial elite. It is leaving power in the hands of exactly the same bodies that failed to prevent the crisis this time around. It is a refusal to question the nature of financial organisation under capitalism.

In a sustainable and just economy banking would be a peripheral rather than parasitical activity. Money would be created to faciliate exchanges. It would be impossible to use money to make more money, which is the source of our current woes. Nothing teaches this better than trying to create your own local currency, as we are here in Stroud. A real money system cannot work without a successful productive economy. Making money is easy, but in an economy that has lived parasitically off the rest of the world for centuries the next step, recreating living productive economies, is a seriously long haul. Tweet
Posted by Molly at 08:00