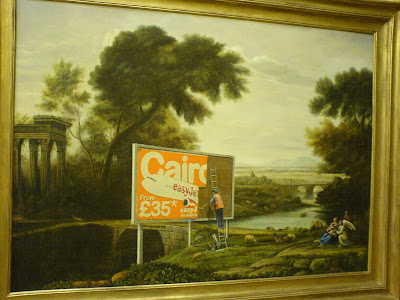 Bristol folk-hero folk-artist Banksy has returned to his roots to transform the city's Art Gallery and museum into a living exemplar of the best of modern art. Thought-provoking, wise and hilarious, it has been attracting throngs of visitors of varying shapes and sizes, ages and classes. It is a pleasure to be at an exhibition where rather than wondering what they should think or feel about the art people are just spontaneously laughing out loud. The show is on until the end of August and should not be missed.

The photo above is typical of Banksy's style - witty, provocative and challenging to contemporary culture, in this case the cheap flight. It is a prepared version of Claude Lorrain's Flight into Egypt, entitled 'Flight into Egypt: Budget Version'. 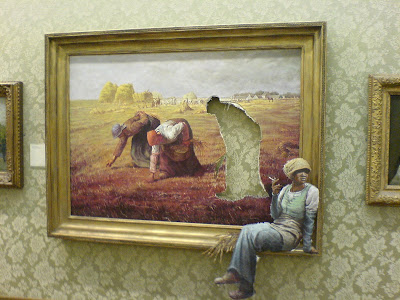 Start the Week this morning included a rather tame discussion about what civilisation means, which degenerated at one point into a sterile debate about the value of modern art. For me, the Banksy exhibition answered the question about what art is for, although questions of its monetary value continue to be problematic. While Banksy now sells internationally at a premium we cannot know how he spends his earnings. He has paid for all the costs of this exhibition, including the many additional staff needed to police the largest crowd seen in the Museum in a generation. Banksy himself obviously has little time for the mass-produced and unimaginative work of commercially focused artists such as Damien Hirst. One of his canvases is a spot painting attributed to 'Local Artist and Damien Hirst'. The spot painting is being covered with grey by a mouse with a stepladder and paint pot. 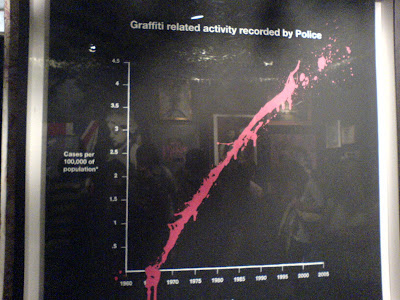 This rather poor photo illustrates Banksy's take on one of my favourite themes - the measurement of the unmeasurable. It is a graphic apparently illustrating crime data on the number of examples of street art experiencing a rapid increase.

The conservative minded commentator on Radio 4 was criticising the lack of nobility of modern art, its failure to show discipline and inspire higher thoughts. His female colleague was presenting her findings on the privatisation of formerly public space. Banksy seems to answer both their arguments. In an era when the complacent consider that we have reached the perfect apotheosis of humanity - the end of history - while children starve in their thousands every day, what could art do other than force us to question everything? And in an era of privatisation of everything from urban space to water supplies, one might well expect to find these questions raised by an artist who uses stolen public space as his preferred canvas. Tweet
Posted by Molly at 17:44