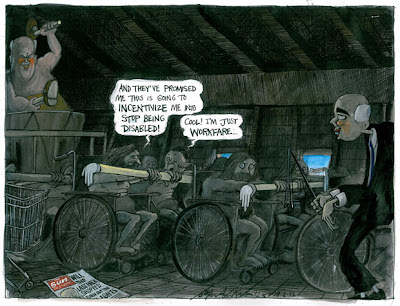 The debate about changes to welfare payments is being held in a rationality vacuum. It rarely rises above the intellectual level of the Jeremy Kyle show, and such divisive rhetoric is used as window to confuse those who might otherwise be in a position to observe the totally reprehensible decision by MPs to effectively cut the payments to a whole range of the country's most vulnerable people.

The economics of this situation is simple and straightforward and revolves around the concept of the 'marginal propensity to consume', another concept due to Keynes. According a a paper relating inequality with the failure of demand and hence the Recession, Matthew Drennan of Cornell University writes the following:

'He [Keynes] inferred from his analysis of the average and marginal propensity to consume that as aggregate income rises, the average propensity to consume (APC) falls. Thus in the long-term the economy would face slower growth or stagnation. To postpone such a development, Keynes believed that a more equal distribution of income would make effectivedemand stronger than a less equal distribution of income.'

In other words, increasing inequality makes a return to growth more difficult to achieve - the first economic blunder of the Tories' decision to cut welfare payments.

But as readers of this blog will know, I do not share the general view that a return to growth should be the primary target of economic policy. We can draw a more interesting conclusion from this idea of the marginal propensity to consume, since what is not consumed is saved, suggesting it arises from 'spare' income. Hence the marginal propensity to consume is higher amongst those with lower incomes.

Now of course much of this 'consumption' is pointless, energy-intensive and probably adds little if anything to human well-being. None the less it is clear that if the share of income spent on consumption is higher amongst the poor, including those receiving welfare payments, then a reduction to their incomes that is equal in percentage terms to the reduction in the income of somebody higher up the income ladder, will hurt the poor proportionately more.

This is why talk of everybody facing an equal percentage reduction in their income is entirely misguided and invidious. When those in well-paid employment have their incomes reduced they simply save a bit less; their consumption patterns barely need to change. In contrast, exactly the same percentage reductions to those on low incomes will immediately cut into their spending, and often reduce their spending on essentials such as heating and food.

This is a small matter of applying our knowledge about income and spending habits to our policy-making. The much wider question of why we transfer money to the poorer members of society, how this relates to the strength of our society, our happiness and sustainability should be the real focus of debate about 'welfare'. My Green House colleague Brian Heatley and I undertook some ground-clearing to facilitate such a debate which you may find of interest.
. Tweet
Posted by Molly at 11:21