The Art of the Hypothetical 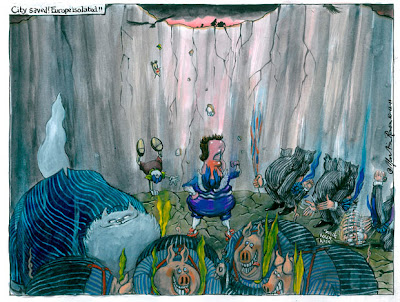 The news, to my rather simplistic way of thinking, is about stuff wot happened. Today's headlines make clear just how wrong I am about this. Today's news is dominated not by events but by a speech that didn't happen twice. First David Cameron moved his speech to avoid the tactlessness of metaphorically bombing the EU on the day of the Franco-German love-in; then he postponed it because there was disastrous news from Algeria. Today what has been billed as a 'long awaited speech', although other than journalists it is hard to find anybody waiting with much excitement, will finally be given. It was so unwelcome in Europe that Cameron ended up delivering it in the last place he wanted: London.

I fear that the outcome of the speech will be to show the Conservatives' approach to Europe as weak and misguided. For some of their less informed supporters, the ones who are considering voting for UKIP, it might seem appropriate to adopt a position of superiority, lecturing the 26 other countries of the EU about what is best for them. This is a posture learned on the playing-fields of Eton where the empire is a fond memory for which such schools and their games masters continue to take credit. In the world where the rest of us  live, Europe is a social club where we feel rather comfortable and where most members operate social, cultural and infrastructural systems we find generally superior to our own.

In such a club you cannot make the rules on your own: you make them by agreement or you are forced to leave. This seems genuinely incomprehensible to the Tories who think we can operate our selfish individualist model of neoliberal capitalism, dump on all the systems our 'European partners' have put in place to protect their peoples and our planet, and still be invited to the party. The Tories' attitude to Europe is the ultimate example of the free-riding of the rational economic man.

The question of a referendum that is at the heart of today's speech is an entirely hypothetical one. What will we be voting to leave or stay in? The crisis in the Eurozone and the fiscal pact that the majority of EU members are now signed up to is in itself not in fînalalised. Cameron vetoed our membership but that leaves open so many questions that a wholesale renegotiation is inevitable. The smart move would be to get ahead in those negotiations, which the better players of the EU game are no doubt doing right now, while Cameron is losing friends in Europe in a desperate attempt to keep friends in his own party.

The very sad thing is that the Euro-sceptics inside the Conservative party have totally outflanked the Cameroons. They know that his strategy of hypothesis-testing is bound to fail. They know that they have already succeeded in making a decision to leave Europe a possible outcome for the first time in three decades. Their understanding of Europe is better, and so it their understanding of politics.
. Tweet
Posted by Molly at 08:11