Potholes in the Amazon Business Plan 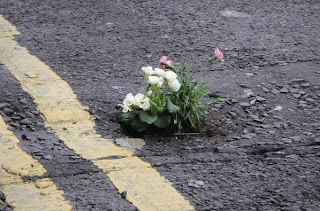 It may be a sign that being a district councillor is getting to me, but I have begun to take an unreasonable amount of interest in potholes. Or perhaps it is because I have now been living without a car for three months, and from the saddle of a bike one's intimacy with the road surface increases considerably. There were two things that really set me to thinking about this most mundane of issues. The first was when I hit a large and definitely new pothole close to my house, in the dark, and was nearly thrown into the path of traffic. The second was a conversation I had with a road-mender, who told me he paid his taxes to have the roads fixed and yet they were becoming worse by the year.

In a way typical of the present approach to public concerns, the government has established a 'report a pothole' website. This is reminiscent of the 'cones hotline' fiasco, and about as likely to result in any action. The 'politics of austerity' means that we must put up with roads full of holes along with a postal service that is no longer reliable and rapidly rising waiting-lists for operations.

So what is the economics of potholes? As usual we need to dig a little bit deeper than questioning who pays and who benefits. The fundamental question is who causes damages to the roads, and do they take responsibility for that damage? Many years ago I stood as a general election candidate in Preseli Pembrokeshire. One of the hot local debates was about the trans-European highway that would traverse the constituency on its way from Latvia to Dublin. This, it was argued, would bring jobs and growth. That was a lie of course. The jobless Welsh citizens watched huge lorries pass through their villages taking products made by low-paid Latvian workers to consumers in Ireland whose purchases were funded by a Celtic boom that has now busted.

The purposes of the guff about trans-European highways was to persuade politicians to spend money upgrading the roads. In contrast to my last post, here we see the European Union most under corporate pressure, with its Council Directive 96/53/EC of 25 July 1996 obliging us to upgrade our roads to permit 40-tonne axle lorries by January 1999. As ever larger lorries have pounded our carriageways costs have risen and the quality of the road surface has declined. This is the reality of the single market: the exploitation of vulnerable workers and the expansion of pointless road freight.

And here is where the pothole whinge meets the other first-world problem of the Christmas period: items bought online that did not arrive in time for Christmas. Because many of the trucks that were hammering the highways during the last month have been delivering items bought from Amazon. The same Amazon that does not pay any tax. So to answer the road-mender's question, if the companies who use the roads for free as part of the slimline business model avoid paying their share of the cost of maintaining them, your taxes can never be stretched far enough to ensure that you will have a comfortable ride.
. Tweet
Posted by Molly at 09:55