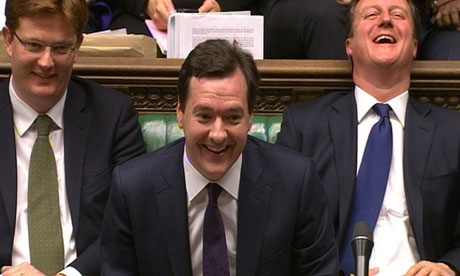 Some have characterised the presentation of the Chancellor's autumn statement yesterday as a paradox of political theatre: how could a man who comes to the house to admit that he has failed in all the objectives he set himself possibly look so cheerful? And how can the opposition perform so badly in response? The key to the answer lies in the word theatre: what the Tories do so well is the debating they learned in their public schools, which they perform with the panache of those educated to know that they have the right to rule.


And from another perspective, of course, Osborne has been one of the Conservatives' most successful chancellors. He has used the financial crisis to advance the interests of capital in ways that would have seemed impossibly radical before 2008. The measures offer clearer evidence yet of the Tory strategy of using the debt to achieve long-desired political objectives.

Item 1 is the cut to corporation tax, now to be reduced by 3% in April rather than the promised 2%, meaning an official rate of 21% from 26% last year: a full 5% reduction in the contribution from business at the very time they are in the dock for avoiding the tax they are supposed to pay. Osborne boasted of his generosity to corporates: 'This is the lowest rate of any major western economy. It is an advert for our country that says: come here; invest here; create jobs here; Britain is open for business.' The headline UK rate has already been reduced from 26% to 24% this year. The rates of 40% in the US, 33% in France and 29% in Germany make it clear which Chancellor is really the capitalist's friend and help to explain why we can no longer afford to fund our public services.


Items 2 is cuts to welfare, with a three-year freeze meaning real reductions and real hardship for all except pensioners. It is basic arithmetic to explain why those on the lowest incomes can least afford to see their incomes squeezed by inflation since the marginal impact on them of rising prices is so much strong. The justice of this situation is about not depriving the poor of the means to survive, rather than some new conservative commitment to income differentials. And meanwhile the stigmatisation of all those who claim welfare (which is probably around 99% of us at some point in our lives) stokes the fires of prejudice and fear.

The best news in the budget is the retreat from an earlier announcement of an end to national public sector pay. In the poorer areas of the country, nationally negotiated pay rates for public-sector workers can keep local businesses afloat in desperate economic times like these. Negotiating deals for teachers and doctors that relates to local labour-markets would have sucked more money out of the regions, exacerbating the inequalities between regions that have already increased throughout this Recession. Presumably the U-turn here was a result of Liberal Democrat pressure.

The 'greenest government ever' banner now lies in tatters at the Chancellor's feet as he lures investors into the sorts of developments that will drive economic growth at any cost, threatens to abandon Labour's climate change targets, and offers subsidies to the frackers. With 30 gas-fired power-stations looming and the final abandonment of the fuel-duty escalator we can wave goodbye to any hope of doing out part to prevent carbon dioxide emissions from spiralling out of control.

The language used by the Chancellor is also deceptive and oppressive, although I find it helps to substitute the word 'capital' for the word 'business', making sense of Osborne's repeated claims to be 'prioritising the interests of business'. I am also intrigued by the constant repetition of the phrase 'the economy is healing'. Is the personification of a complex system made up of a mass of individuals supposed to win or empathy? Or to soften the perception of the stark economic news? It is fairly clear that, rather than healing, the economy is like a patient that has been stitched up leaving a festering wound inside. Proper healing would have required tackling the distorted financial and monetary systems rather than ignoring their flaws and hoping that they will somehow mend themselves.
.
Tweet
Posted by Molly at 07:38