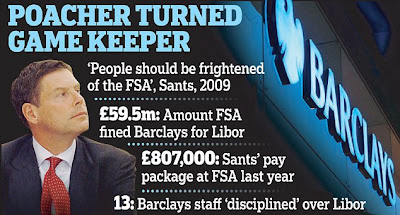 How on earth can it be justified to give Hector Sants a knighthood in the New Year's Honours List? More than anybody else he is responsible for allowing the public interest to be neglected so that bankers could profit. His tenure as boss of the Financial Services Authority in the period leading up to the financial crisis defeats all attempts at superlatives. As the man who, more than any other individual, is responsible for the worst financial crisis for a century, that has detroyed livelihoods and bankrupted the country 'disastrous failure' seems wholly inadequate.

In a way typical of the Information Age, when if something isn't available via Google then it is not information, it is quite difficult to find out anything interesting about Sants. We do know that he approved the RBS takeover of the Dutch bank ABN Amro, costing billions in public money when RBS had to be taken into public ownership. We also know that the Commons Treasury Committee accused him of being 'asleep at the wheel' as the British economic car veered wildly around the risky financial roads to speculation and dodgey takeover deals. More speculatively, in March of this year the Evening Standard reported on Sants's failure to protect UK investors during the collapse of broking firm MF Global.

He seems fairly efficient at organising his own PR, viz this fawning story by Jill Treanor in the Guardian, encouraging us to admire a man who gives up his massively overpaid job in the city to engage in public service as a regulator. I suppose she must be feeling rather sheepish since news emerged about his megabucks position at Barclays. From banker, to the regulator who did not regulate, and back to banker - what is there to admire in such a trajectory? Awarding a public honour to such a man is just to rub our noses in the culture of rewards for failure, while the price of the failure is borne by citizens who just work hard or the vulnerable who rely on public services.

In his evidence to the HoC inquiry Sants commented that people who have shown 'serial misjudgement' should not be allowed to run financial organisations again. Although he also confessed to his own failure in this evidence he does not seem to think this undermines his right to a multi-million pound job as head of compliance at Barclays. In awarding him a knighthood the establishment clearly agree. His service to British banking has been rewarded; the devastation wreaked on the British people and our economy ignored.
. Tweet
Posted by Molly at 09:36