Not with a Bang - Not Yet 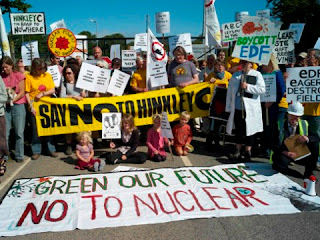 The news that the inquiry into the decision about whether to build a new nuclear station at Hinkley Point in Somerset was complete in less than a year slid out into the public domain almost unnoticed. In spite of the horrors of Fukushima - still unresolved - in spite of the decisions by a number of other countries to abandon their nuclear programmes, the UK government is still ploughing ahead with this dangerous and out-dated technology. Local people demonstrated but were barely covered by national media. Where was the lengthy and dramatic public inquiry, akin to the three-year process that preceded the permission for a new station at Sizewell in 1987?

Such things are now vestiges of a lost democracy, swept away in the brave new world of the Infrastructure Planning Commission, now 'seamlessly transferred' into the Planning Inspectorate. Without any apparent irony the government website informs us that: 'The main change introduced by the Localism Act will be that the relevant Secretary of State will be the decision maker on all national infrastructure applications for development consent. The Secretary of State will have three months to make a decision, following a recommendation from the Planning Inspectorate'. The main consequence of Pickles's commitment to localism is that he will now make all controversial decisions in his department in London.

Being somewhat surprised about the speed with which the Hinkley decision was made I enquired of the National Infrastructure Directorate of the Planning Inspectorate about how the members of the Hinkley panel were chosen and what was their relevant experience. I was told that when the IPC was an independent body the Commissioners were public office-holders whose biographies and personal information was available on the IPC's website. When it was subsumed into the Planning Inspectorate they became civil servants and so it was no longer appropriate to publish their personal details.

Chair of the panel Andrew Philipson appears to set the tone for the approach to people's concerns in the face of the planning juggernaut. According to a press release from Stop Hinkley: 'When local resident and single mother Nikki Clarke asked who would look at the dangers of nuclear power to the health of local children if the IPC were not prepared to do so, Sir Andrew's response was to tell her that her point was irrelevant; when she tried to continue he had her microphone switched off and adjourned the meeting, asking her to leave.'

This is what the Ministry of Localism means: the ministry of centralised decision-making in favour of the elites, within a government committed to communication by doublespeak.
Tweet
Posted by Molly at 10:22