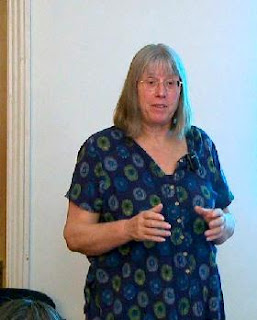 Many people are seeking to understand how the money system works and looking for answers on websites and in books. My own journey of discovery has been informed more by Mary Mellor than by anybody else. She has a refreshingly down-to-earth approach and an underlying commitment to sustainability that make her explanation particularly appealing.

Very sensibly, Mary's local Transition Towns network asked her to give a series of lectures explaining money, which were filmed and have been made available online. Mary gives four lectures: What is Money?, Money and Banking, The Financial Crisis, and The Future of Money. Mary's view of the latter is an empowering one: money should be a social resource from which we all benefit. We must end the privatisation of money and the banking monopoly.

Mary is critical of the view of money in economic theory, claiming that it is shot through with inconsistencies. It is focused on modelling rather than understanding. 'The influence on coinage on Western notions of money has misled us', she claims. Even in 1698 the amount of money held in 'tally sticks', a physical system of recording money owed between two parties, was actually larger than the amount of money held in coins. Money is a story of relationships, a story of communities, and of economic exchanges based on trust.

James Robertson, doyen of the monetary reform movement and grandfather of green economics, said about these lectures: 'Mary Mellor's understanding makes an essential contribution to anyone wanting to know more about how the money system work and what its future could and should be. I warmly recommend these films to anyone who wants to learn more and think what we should do about it.' So please find time to watch them, learn more, and begin to change the world.
. Tweet
Posted by Molly at 10:26