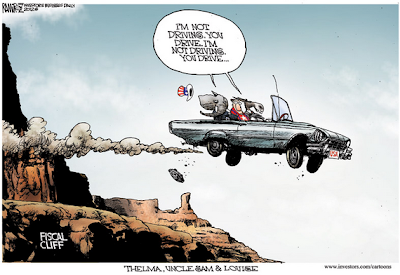 Economics is a complex study because economies are systems reliant on many variables which interact with each other in ways that are difficult to interpret. As an economist what you tend to do is to have a basic belief about how the interactions work and a particular focus on variables you think matter most. A Keynesian, for example, would focus strongly on effective demand and its interaction with government spending. A neoclassical would focus on tax cuts for the wealthy as a stimulus to economic activity. A green economist would make energy a key variable in their consideration, as well as money.

But surely we must be consistent in our basic understanding of how economies work. So if we think that spending cuts can lead to recession in one country this must be the case for another country that also has a similar level of economic development and is also a capitalist economy? I ask this question because of the bizarrely inconsistent reporting of the emergency debate in the US about whether to rush voluntarily over the 'fiscal cliff'. In 2011 Congress passed the Fiscal Control Act, limiting politicians' freedom to make economic policy, and particularly prohibiting any policy that would increase the country's enormous debt.

It is an indication of the atrophied state of US democracy and the poor quality of its politicians that they can only make policy by tying their own hands at some future date. If the do not agree today then both sides will lose: there will be a rollback of Bush's tax breaks for the wealthy matched by cuts in spending on programmes for the vulnerable, including Medicare.

The political fight between politicians who have had to accumulate vast sums of campaign funding just to reach office is an unseemly and unrepresentative one, but the reporting of the potential consequences of 'falling off the cliff' is more troubling. The BBC reports baldly that the spending cuts could 'trigger a US slowdown' that might also lead to an intensification of the recession in the global economy. If this is so easy to see from the perspective of the other side of the Atlantic, why is it so hard to see that similar policies to cut public spending are also destructive to our own economy? As US politicians are criticised for stumbling towards the edge of the cliff, why are the same journalists not criticising the lemming-like instincts of Osborne and chums who gleefully decided to push us all over that cliff in their first budget proposals?

As I said earlier, it is hard to explain how economies work, and much harder to predict future economic outcomes. That is precisely why it matters to have a basic theory of how the main variables interact. If you think that public spending cuts lead to recession then you should say that clearly, and as clearly at home as when critiquing somebody else's economy. What we have seen so far in terms of public-spending cuts has been just the overture: the huge cuts to disability payments, housing benefits and transfers to local authorities represent significant withdrawal of effective demand. The consequences for the national economy will be a year of even deeper recession in 2013.
. Tweet
Posted by Molly at 10:22