Economics Students on the Move 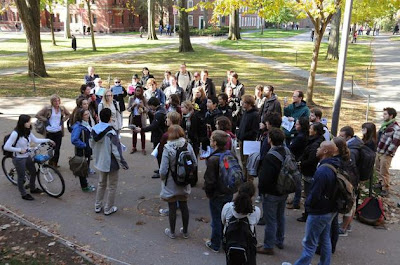 How our economy will be organised in the future relies heavily on how our future economists understand the world and its workings, as well as their values. Economics education is obviously, therefore, of fundamental importance. The movements to reform economics education, shifting it from the realm of theology into one of pluralism and genuine debate, have been followed with interest by this blog.

So it is with delight that I heard this morning of the revolt by Greg Mankiw's students. Manikiw is the author of one of the most widely used introductory textbooks, as described by Geofrey Hodgson:

'Gregory Mankiw’s Principles of Economics, in its five versions, has internationally been the dominant basic text for more than a decade. Also its author was chairman of President Bush’s Council of Economic Advisers from 2003 to 2005.'

Here is the letter his students at Harvard, paying $40,000 for the privilege of biased and distorted information, presented to accompany their walkout from his introductory economics class, according to a US blog:

Today, we are walking out of your class, Economics 10, in order to express our discontent with the bias inherent in this introductory economics course. We are deeply concerned about the way that this bias affects students, the University, and our greater society.

As Harvard undergraduates, we enrolled in Economics 10 hoping to gain a broad and introductory foundation of economic theory that would assist us in our various intellectual pursuits and diverse disciplines, which range from Economics, to Government, to Environmental Sciences and Public Policy, and beyond. Instead, we found a course that espouses a specific—and limited—view of economics that we believe perpetuates problematic and inefficient systems of economic inequality in our society today.

A legitimate academic study of economics must include a critical discussion of both the benefits and flaws of different economic simplifying models. As your class does not include primary sources and rarely features articles from academic journals, we have very little access to alternative approaches to economics. There is no justification for presenting Adam Smith’s economic theories as more fundamental or basic than, for example, Keynesian theory.'

The students undertook this action to express solidarity with the Occupy Wall Street movement.

Mankiw is a populist, using his own blog to blandly reassure about the existing economic model, blithely ignoring its destructive impacts and its lack of connection with reality. The fact that his own students are alive to this and are following the example of students in Paris and Cambridge in calling for an economic education that takes seriously the problems of the world we live in is hugely encouraging.
. Tweet
Posted by Molly at 06:43