Politicians Paint Themselves into a Market Corner 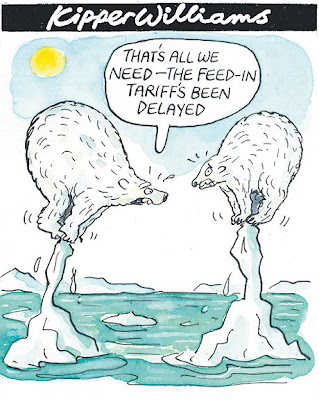 The shenanigans over the rate of the feed-in tariff is a good example of the way in which politicians have, in accepting the myth of the omnipotent market, limited their room for manoeuvre and made themselves incapable of taking the steps necessary to ensure social and environmental benefit.

We can argue about the appropriateness or otherwise of the 43.3p set by Labour for the rate of the feed-in tariff and whether it was just a deliberate banana-skin for the incoming Tory government, but the broader question of who should pay the cost is what really demands attention. The transfer of money uniformly via energy bills in a market dominated by an informal cartel and from those who can least afford to pay, towards those who have the spare resources to buy solar panels to install and would then receive the tariff was always a questionable scheme.

Imagine a world where the production and distribution of energy was in public hands - local government rather than national, ideally - and where the cost of energy rose as you used more, rather than costing most when you use least. The extra money charged to heavy energy users could be made available via grants to local people, or used to directly fund the installation of solar panels on the roofs of the tenants of social housing, who are least able to pay their energy bills. You have neatly created a just solution and simultaneously generated sustained demand for solar panels, reducing costs and making them available at a lower price to those who can afford to buy their own. This is a political solution, but it is hardly communism.

In the end this decision to set a price to underpin the development of a market for solar in the UK, immediately followed by a reversal, is bad for business too. It gives a mixed message which is exactly the opposite of the clear signal businesses need to make investment decisions. It will have negative knock-on effects in other areas, as managers doubt political commitment to the transition to a green economy.

As the myth of the market itself corners the market in ideas, we see the consequences in terms of inert and impotent politicians, and we all pay the social and ecological price.
. Tweet
Posted by Molly at 11:58