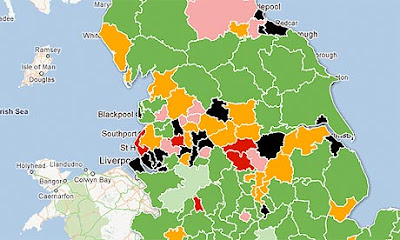 I write this post as a councillor in the local authority that faced the largest cut in its central government funding in the current funding period - a full 28% over this and next financial years. I assume this is a reward for having a Tory council and having just elected a Tory MP, as well as being a debt-free local authority. I have to hope that the good voters of Stroud draw the right conclusions and do something different with their votes next time.

Recent research from Newcastle City Council has made me feel both better and worse. Published in today's Guardian it makes the partisanship of the present government plain to see. Traditional redistribution measures, including the sharing of local authority rents and local business rates, are being abolished, leaving the richer parts of the country free to profit while those in the deindustrialised north in particular struggle. Northern cities and boroughs are losing £150 to £200 per head, while the leafy boroughs and shires of the south lose between nothing and £50 per head.

The inequalities are magnified by the fact that poorer areas are more dependent on public-sector jobs, which are some of the few well-paid jobs in northern cities that once depended on skilled manual jobs. The massive cuts to the public sector will also hit these areas disproportionately hard.

From a macroeconomic point of view this makes plain the massive withdrawal of liquidity from the local economies up and down our country that is taking place. The paradox of thrift is alive and well in Stroud, as councillors and officers alike respond to fear and threats of future austerity by leaving posts unfilled and cutting spending to add money to the growing reserve. The shade of Keynes haunts our council chambers, but nobody is listening.
. Tweet
Posted by Molly at 08:30