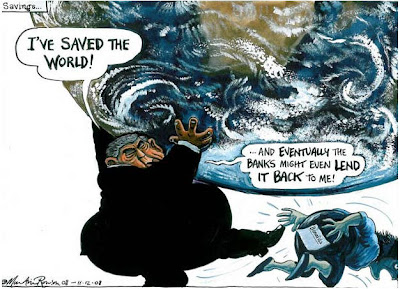 To the plethora of three-letter acronyms that infest the discussion of finance has been added another. Alongside the CDO and the CDS we now have to contend with the DSK. Like the others the outward power and appeal of the DSK has given way to doubts about its inherent quality. We are led to question whether, behind the impressive facade, it may be toxic.

We must, of course, respect the presumption of innocence, but even if Strauss-Kahn is eventually cleared over the sexually aggressive charges against him now, the scandal has brought into the open his past sexual conduct, which I am old-fashioned enough, and perhaps Anglo-Saxon enough, to consider undermines his suitability to hold the most powerful office in the world of global finance.

It has been clear for some time that what is happening in the world's banking system has passed beyond the stage where we might consider that there is merely something rotten. The whole system is corrupt, dishonest and socially destructive. The fact that its figurehead personifies these qualities, while revelling in the sort of lifestyle that is an insult to the working people in countries the IMF is supposed to be aiding, just reinforces the sense of hypocrisy. There is no glee at this scandal but a growing sense of disgust that we have been betrayed by those in whom we have entrusted power.

The process of ‘financialisation’, a term coined by social scientists to describe the way that relationships mediated through finance have penetrated more and more areas of life, is the hallmark of contemporary capitalism. Money is exalted until social and economic institutions are hollowed out of other values, with finance taking up all the space. Whether we are thinking of pensions and mortgages, or football and the music industry, the greed and immorality of the world of finance has spilled over into most areas of modern life.

The fall of Strauss-Kahn has left two huge voids: at the IMF and in French politics. It is an indication of how desperate the stakes are that I am rather hoping that Gordon Brown may finally be given the chance to achieve his life's hopes by taking over at the world's central bank. I have long since given up hope that he would then reveal his colours as a former communist and have the courage to take political control over the disaster that an the private operation of capital has engendered, but at least he seems to have maintained a sense of moral purpose rather than being dazzled by wealth.

In French politics there may be another interesting outcome. Because of the double ballot system used for French presidential elections, the left must coalesce around one candidate, who need not necessarily come from the socialist party. Eva Joly, who has already proved herself capable of standing up to the might of the oil and finance industries, is likely to be the candidate from the Green Party. Given the disarray that DSK's fall has created in the socialist party, perhaps Joly will be the beneficiary, giving her the chance to compete directly with Sarkozy to lead the country.
. Tweet
Posted by Molly at 08:21