Who do we owe the national debt to? 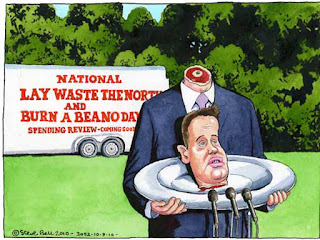 On this day when we finally hear the details about the cuts that we have been bullied and battered with for the past six months, it might be helpful to have a bit of a recap about what the alternatives are for dealing with the huge debt that we are left with after the banking bailout.

Many commentators have pointed out that there are two sides to the public balance-sheet and that the focus on cutting the spending side, rather than raising more revenue through increased taxes, especially on the corporate sector which has done so well from our largesse, is an entirely political decision. Another approach which is available even within the existing capitalist structure could involve managing the economy into a smaller and more equal form, thus achieving the sorts of social side-benefits that are identified in The Spirit Level.

But on this morning, of all mornings, let us look beyong the political rhetoric and think about the hard finance of the situation. That takes us to the question many outside the media bubble are asking: who do we owe this money to? And in a world where nearly every government is facing a similar problem of massive debt, could we not all come to some agreement to forgive each other and start again? In following up on the accuracy of a statement by George Osborne that the interest we are paying on the debt is going to foreign governments, my friend and colleague Barbara Panvel has done the bit of research necessary to answer the question about who the money is actually owed to, and the answer raises a whole series of new questions.

The figures, from the website of the government Debt Management Office, indicate that much of the money we are paying on our national debt borrowings is not going to foreign governments, as George Osborne gave as a justification for the need to urgently cut the size of the debt, but rather to our own good selves in various guises. So the cuts programme is really an example of robbing Peter to pay Paul. The data shown in the graphic indicate that only 29 per cent of the gilts currently in circulation are held by overseas investors, with slightly more (30%) being held by UK insurance companies and pension funds. The figures also indicate that nearly a quarter of our own national debt currently belongs to the Bank of England, which I assume is the result of the quantitative easing policy.

So who would lose out if we acknowledged that repayment of a debt on this scale is inconsistent with living in a civilised society, and began a policy of negotiating with creditors that they would not see the whole of their lending repaid? For those who have investments in pension funds, they will see their pensions reduced while their services are protected, so it will be a trade-off, but one that is fairer because those with larger savings will lose more, in contrast to the spending cuts that hit the poorest hardest. The overseas and other financial institutions would also lose out but this could be seen as compensation for the massive investment bubble they benefited from, and gained from, and which caused the banking and credit crisis that landed us all in this mess.

So there are a range of alternatives, with different degrees of challenge to the existing economic system, that are available to the UK government. To suggest that destroying the remaining vestiges of solidarity in our society is the only option is the big lie for our times. Tweet
Posted by Molly at 09:50