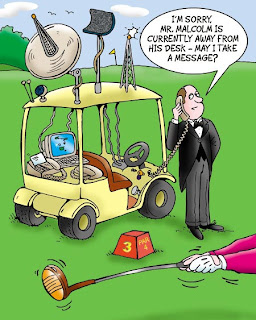 I consider myself a Welsh patriot. I have been watching Wales play rugby since I was 7 or 8, I once used the word hiraeth in an academic paper, and I would live in Wales now if it were not for the fact that the more rampant nationalists made me feel that I had to apologise every morning for my English father. I am beginning like this lest you think that what follows is an example of the tired English chauvinism towards the Welsh that has offended me all my life.

On this day when the world's attention leaves Newport for another 400 years or so I have to ask: what is Wales doing hosting the Ryder Cup? Golf is not a sport: it is a statement of corporate intent. Golf is a game indulged in by men in suits who rarely have another opportunity to walk on grass. That it attracts spectators is as inconceivable to me as that there are hordes of crowds at the world paint-drying championships.

Thomas Friedman, author of the best-selling tribute to globalisation The World is Flat lists his ability to play golf in Bangalore as a demonstration of the equalising power of corporate capitalism. Here is how he starts that world-beating book:

You do not need to be very much in touch with your local environment to realise that a game devised in windy, rainy Scotland does not transplant well to Bangalore, and consequently the water demand associated with golf's tracking of the movements of corporate executives has disastrous environmental consequences. In Dubai, apparently, they play golf on sand instead.

The word on the street is that ticket sales for the Ryder Cup at Celtic Manor were poor – even before nature decided to take a hand and send two of the rainiest days we have seen for months. (And before you amuse yourselves at the expense of the Welsh weather, just pause to think how long it will be before you will be grateful for – and paying for – the liquid stuff we have in such abundance.) I am genuinely not pleased about this, in spite of my squirming amusement at the desperate attempts to market Newport as a world city of culture and the hideous waste of resources spent prostituting ourselves to the global executive class.

What has always distressed me most about Wales is it inferiority complex. We have one of the most naturally beautiful countries in the world, with all the resources necessary to thrive in a bioregional future. Energy resources abound, population is sparse and the soil rich. And what about the likes of Dylan Thomas and Tom Jones: laughter, music and a depth of talent in poetry and spirituality could ensure a deeply fulfilling life. If only the Welsh economic planners would stop trailing along after the US management consultant's last-but-one bright idea. Tweet
Posted by Molly at 09:50