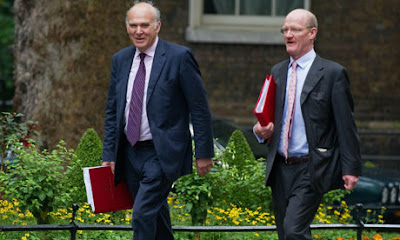 The blizzard of policy announcements since May has been quite bewildering. Journalists and academics are reeling at the pace of change, and much of what is being proposed seems both illogical and inconsistent. In my own area, that of higher education, the aim of the policy seems fairly clearly: to reduce the number of young people going to university. Raising fees from £3,000 to £7,000 or more is not a funding measure but a rationing measure.

The Telegraph headline may read 'too many middle-class students at university' but is not very informative until we have a clear idea of what 'middle class' means. As the cuts proceed it appears to be the very concept of 'middle class' that is being squeezed. Perhaps we could have a more informed debate if the sociologists who used to explain to use what class meant had not all been removed from their posts during the 1980s Thatcherite purges.

Clegg argues that tuition fees led to an unfair system of admissions; the Lib Dems graduate tax would ensure social mobility. The actual policy has focused on cutting costs, so the 'too many students' part stuck but the graduate tax was lost. Two posts in a row citing Clegg unfavourably might be considered unfair, but he has foolishly allowed himself to be the fall-guy for the coalition's policies. It's a small step from 'too many middle class students' to 'too many students', and naive Nick has done the Tories dirty work for them.

For those who missed the announcement because they were looking down a Chilean mine, and to those whose minds cannot accept it and are still asking 'eight-teen per cent?', let me repeat here that the policy proposed by the erudite Lord Browne is that the teaching grant should be cut by 80%. In future the government will only subsidise medicine, science, engineering and modern languages degrees. The sorts of courses we need our thrusting businesspeople to be equipped with, which is unsurprising given that Browne and Cable (who will implement this policy on behalf of the coalition) are both veterans of the corporate oil industry.

The savings that will result from this reduction in funding a civilised society is £3.5bn. In comparison with the size of the bailout this seems like a drop in the ocean. Corporate pressure has already diminished the standards of education in our universities; this will convert them into external training departments for the globalised business elite. As well-qualified young people who choose to enter employment rather than university displace their less well-qualified contemporaries unemployment rates are sure to rise, bolstered by the cohorts of university teachers whose skills will no longer be required. The savings will be cancelled out but this does not mean the policy is misguided, since its aim was always political rather than economic.

The Browne Review promised to ask searching questions about what our universities are for, but none of the most important questions were considered. How might our cleverest citizens prepare society for the transition to a low-carbon economy? How do we balance the interests of business and citizens in determining curricula? How might universities be models of transition institutions, rather than following an export-led growth model of education?

These questions were not asked because Lord Browne already knew the answer to his own question. Our professors are required to work in the service of business and to prepare a new generation of serfs to do likewise. Critical thinking is off the menu: the new paradigm will be developed elsewhere. Tweet
Posted by Molly at 08:54