Kevin Rudd: My Part in His Downfall

This is my title but, as you will see from this guest post by Clive Spash, a not entirely inappropriate one. Kevin Rudd may come to be seen as the first premier to become a political victim of climate change.

The demise of Kevin Rudd leaves some stark questions as to how Australia will ever tackle the power of the resource extraction sector. Rudd is cited as having become unpopular for having dropped a carbon emission trading scheme and for having advocated a tax on the mining sector.

Was Rudd wrong to ditch carbon trading? Clearly not in my opinion. Amongst many issues, the scheme (originally developed under the Howard government) was set to transfer billions of dollars to the coal and aluminium industries in 'compensation' and was designed to achieve no domestic reductions, pushing action onto the poor in other countries. Yet Rudd and his party refused to recognise such issues and only abandoned the scheme under political duress. Indeed explaining the general problems with such schemes, in academic terms, led to my own work being banned, subject to censorship and led to my resignation as a senior Australian civil servant. Is this something for which Rudd or his government could be blamed or is there a deeper malaise in Australian politics? 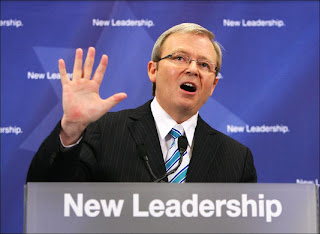 In November last year, the Australian Senate had a special one hour debate on whether the Rudd government was undertaking censorship. Rudd's party colleague, Minister Kim Carr, responsible for the CSIRO where I worked, later tabled a letter by the head of the organisation, Megan Clark, making a series of false allegations against me. Megan Clark is herself a former mining corporation (BHP Billiton) executive. In February this year, in a Senate Estimates Committee, the two attempted to deride my work on emissions trading and question its quality (despite its acceptance in a journal The Australian Research Council ranks as ‘A’ listed under its programme for Excellence in Research for Australia). Minister Carr readout a few selected phrases from a four page confidential journal referees report which can only have been placed in his hands by the CSIRO. These individuals have failed to suppress the work or damage its credibility, but what they did do was to expose the links between a Minister and the supposedly independent results coming from a government research agency. Carr also exposed the readiness of a Minister to place his own opinion above the scientific peer review process.

Rather than the Rudd government attacking alternative voices on climate change policy they should have been listening. They might then have developed a more sensible approach to tackling human induced climate change than the second hand policies of their opponents. Environmentalist should remember that Rudd's action of signing Kyoto meant not cuts in emissions but actually a commitment to an increase of 8 percent over 1990 levels. Rudd offered no alternatives to the rejected emissions trading scheme and seemed at a total loss as to what to do next. This failure to explore alternatives appears to be a long running Australian government problem, not just restricted to Rudd. For example, if research had been ongoing in a fair and open manner Australia might by now be leading the world in the renewable energy sector. Instead it is leading the world in resource extraction and sales of coal, especially to China.

Recent attempts to fund renewables also appear to have gone astray. Energy Minister, Martin Ferguson's solar energy flagship has been criticised as excluding those with the most advanced technology and best experience. Instead the short listed companies included some highly questionable fossil fuel corporations with little or no experience of large scale solar. The flagship was floated short on funds and with little regard to the requirements for creating and sustaining a solar sector. Ferguson has also appeared on television defending large greenhouse gas emitting energy technologies. He has stated the government does not select winners and these things should be left to the market (http://www.abc.net.au/lateline/content/2010/s2842402.htm). That markets are structured institutions set-up by social rules of governance and public policy seems to have slipped his notice, or perhaps not!

Rudd's own failure seems to have been one of too slowly becoming aware of where power lies in Australia. The final substantive act of Rudd's government was to try taxing super profits in the mining sector. This led to BHP, Rio Tinto, Fortescue Metal, Santos and the Minerals Council of Australia spinning propaganda about the tax destroying value for the miner and the nation. Opposition from Western Australia and Queensland inevitably followed. The fact that Rudd was overthrown from within his own party highlights the sensitivity of Australian politicians to mining interests.

The downfall of Rudd indicates on-going problems within Australia of how to control big coal, big mining and international corporations. Things could have been different. A politician brave enough to face down the climate sceptics while admitting emissions trading is a flawed approach should have offered real alternatives. A politician ready to take-on the mining sector and bring-in a serious resource tax should have been ready to first fight the same vested interests to put in place a tax on greenhouse gases. Revenue could then have supported a transition of the economy. A politician ready to seriously support a renewable energy sector could have taken Australia into a new era and weaned it off coal. Instead half hearted attempts at ill-conceived policies have left Australia as the biggest per capita carbon emitter in the world with a political economy heavily invested in exploitation of the environment. Tweet
Posted by Molly at 20:28