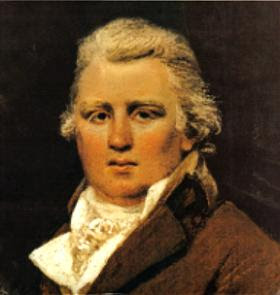 I've mentioned William Cobbett on this blog before, that time with reference to his reflections on the cottage economy. During the ferment of political activity that led up to the passing of the Great Reform Bill in 1832, Cobbett travelled the country reporting on the dreadful conditions being faced by working people. What he witnessed is reported in his endearing style - stranded between sentimentality and indignation - in his Rural Rides.

Cobbett visited Stroud in September in September 1826, when the British economy was suffering one of its periodic slumps, to the extent that he mentions more than 100 acres of fields which had racks for drying the newly dyed cloth on tenterhooks which were completely empty.

In spite of the interruption of trade and the low level of wages Cobbett notes that Gloucesteshire is a rich land. He finds none of the tough Northern attitudes here and the overseers and magistrates 'do not presume that they are to leave any body to starve to death':

'this is England, and not in 'the North', where those who ought to see that the poor do not suffer, talk of their dying of hunger and applaud them for their patient resignation! The Gloucestershire people have no notion of dying with hunger; and it is with great pleasure that I remark, that I have seen no woe-worn creature this day. The people seem to have been constantly well off. A pig in almost every cottage sty; and that is the infallible mark of a happy people.'

Cobbett enjoys an in-joke with his political economist reader, mentioning his meeting with a local plumber on his way to mend the pipes for 'Squire Ricardo' who is so rich that nobody would consider him a neighbour. The famous theorist of political economy lived near Stroud at Gatcombe Park, now home to Princess Anne. One of his sons was MP for Stroud following the Reform.

We are frequently accused in Stroud of being softy southerners, of having an easy job of the Transition. A friend cautions me to always be aware of the hat-grit balance when extolling the virtues of the bioregional economy. Do I dare to delight in my locally made hat while others in more depressed economies are struggling to survive?

There is a balance to be struck between the donning of the hair-shirt and the practice of joy. As Rob Hopkins points out, we are unlikely to tempt others to join us in the transition to a low-carbon future if we make it sound so unappealing. Likewise in modelling the future we want to build we should take care to ensure that there is restfulness and joy in our own lives. Tweet
Posted by Molly at 10:44