Gilty Secrets of the Treasury

For those whose interest in what the hell the government is up to with our monetary policy continues, I offer the Debt and Reserves (as if!) Management Report 2009/10 from the government's Debt Management Agency. I bet that looked like a cushy number when the tender went out.

There are some great data and graphics indicating the horrendous debt situation we are in. The report also informs us that the some of the auctions of government debt have had ‘largeer than average tails’ as a result of ‘volatile gilt market conditions’. A helpful note informs us that ‘the tail is the yield at the lowest accepted price less the yield at the average accepted price’, in other words the debt is getting harder to shift. This is confirmed by the admission that there was an ‘uncovered’ auction on 25th March, i.e. some of the debt remained unsold. (This is illustrated in the second reproduced graphic.) 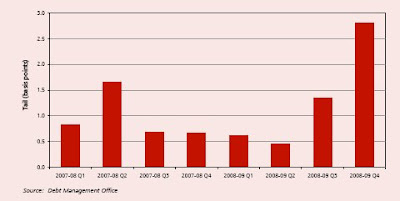 Here is how the report describes the introduction of quantitative easing:

On 19 January 2009, the Government established the Asset Purchase Facility (APF) to enable the Bank of England to ease credit conditions in corporate debt markets by making purchases of private sector assets. On 5 March 2009, the Monetary Policy Committee of the Bank of England (MPC) announced its decision to use the APF for monetary policy purposes by purchasing £75 billion of assets (the majority of which would be gilts) in the following three months financed by the provision of central bank reserves. The asset purchases are designed to influence the quantity of broad money as a supplement to setting the level of the Base Rate.

In February Mervyn King got the wind up about the buying back of our own debt and wrote to the Chancellor to require that ‘It should not alter its issuance strategy as a result of the transactions undertaken through the Asset Purchase Facility for monetary policy purposes.’ The Chancellor maintained that the objectives of monetary policy had remained the same, and that these remained ‘to minimise, over the long-term, the costs of meeting the Government’s financing needs, taking into account risk, whilst ensuring that debt management policy is consistent with the aims of monetary policy’.

I'm afraid I can only bear so much of this deliberately obfuscatory prose. It does nothing to change my view that we need to have an up-front and just negotiation about how the debt is removed from the economy, together with a revision to the money-creation system that makes a similar bust impossible in future.

Yesterday, the Treasury Select Committee criticised the Treasury for focusing the money created through the QE policy on managing the monetary aspect of the problem, rather than supporting the real economy, which was the justification for the policy and the reason the Bank of England agreed to it. So far of the money created £2.8bn. has been spent on corporate debts, compared with £51bn. used to buy up government debt. Tweet
Posted by Molly at 13:53