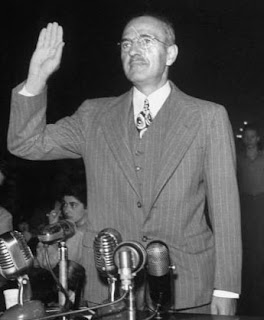 The similarities between the current global economic crisis and that of the 1930s has led many more thoughtful commentators to re-evaluate the importance of history to the development of policy. A striking recent example, which has been poorly trailed but is well worth watching, is Stephanie Flanders recent series Masters of Money. The link with the Open University shows, but isn't it time we all knew a little more about the variety of economic theories? Flanders makes a sterling effort to explain the thinking of three 20th-century giants - Keynes, Hayek, and Marx - none of whom, interestingly are being paid much heed by contemporary politicians.

I revealed my own interest in economic history in a recent article that was posted on the New Statesman economic blog Current Account. What perked my interest was the revelation that Harry Dexter White, Keynes's sparring partner at the Bretton Woods negotiations and effectively the architect of the post-war global financial settlement, was in fact a Soviet spy. As I point out in the article, in 1944 the US and Soviet Union were still allies, so this is not such a bizarre situation as it might have been by 1948, but none the less it does raise questions about exactly what the negotiators at Bretton Woods were seeking to achieve.

Perhaps the most touching lesson from history is that 100 or so years ago key figures in public life made it their life's work to understand the complexities of the economy. Their objective was not self-aggrandisement or self-enrichment but the impulse to make life better for their fellow citizens. While I find Hayek's idea that politicians should never intervene in markets to be utterly misguided, I can understand how he learned this lesson during the hyper-inflated Vienna where he was a young man, and that his scholarship was dedicated to preventing the same sort of suffering from occurring again. How distant and quaint such motivations seem today, when the highest aim of most authors is to be granted the accolade of a TV series.

As I conclude in my article about Bretton Woods, both the authors of the compact appear to have died of broken hearts: Keynes was dead within two years of the ending of the conference, worn out by his attempts to ensure peace in his time and ours. White outlasted him by two years but could not survive the pressure of the McCarthy era. He suffered a heart attack shortly after giving evidence to McCarthy’s House Unamerican Activities Committee in August 1948.
.