Economics in University: Teaching or Propaganda? 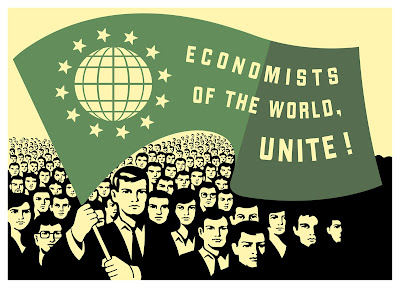 In spite of the utter failure of academic and professional economists to predict, explain or find solutions to the financial and economic crises sweeping the globalised, marketised world they have created, there is still little challenge to the narrow and one-sided way that economics is taught in our universities. In spite of the fact that economics is about complex human relationships, and is therefore bound to be the subject of debate and disagreement, there is no problem with university courses that only teach the neoclassical pro-market approach.

A list of universities that offer 'pluralist' components in their courses, that is to say that they include approaches other than the neoclassical orthodoxy, does exist, but it is short. The Association of Heterodox Economics is doing great work here, but it is unfunded and run by people who know that their commitment to dissent and debate will limit the success of their careers, their opportunities for promotion and publication, and their chances of finding research funding.

In the US, the website Remapping Debate is running a series of articles on the limitations and political bias of economics education in universities. In the latest Martha Starr, professor of economics at American University, makes the obvious point that it is not helpful to teach students about economics as though all the problems have been solved. Not only does this make it less likely that they will come up with new solutions, but given the mayhem they see all around them it is likely to be unconvincing. In any other subject this proposal of dividing up the curriculum between different schools of thought; only in economics could this seem dangerously radical.

This is not an internally focused debate revolving around a bunch of disgruntled academics. Politicians and policy-makers have generally studied one year of economics, which means that they have learned the biased system of thought and the mantras they repeat throughout their lives, limiting options and closing down debate. Teaching orthodoxy rather than reality is dangerous and is against the academic freedom which our universities should set as their highest standard.
. Tweet
Posted by Molly at 07:28