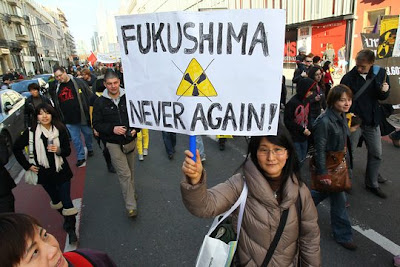 A year on from the Japanese tsunami I would like to think about how the consequent disaster at the Fukushima nuclear plant is something of a parable of the problem of increasing scale without rethinking design. This is a story told by Adam Curtis in his documentary : here I apply it to the need to rethink our economic scale.

In its early days the nuclear industry was dominated by scientists; sometimes they were rather over-exuberant and they made claims that they later found it hard to meet, but for the first generation of nuclear developers, science was queen, and their respect for her was appropriate. What they designed was a nuclear reactor for use aboard submarines, to enable them to continue to function without the need for refuelling, a crucial geopolitical advantage in the era of the Cold War.

At the size necessary to power a submarine the reactor could not go into meltdown; there was simply insufficient fuel to enable this to happen. But at this scale nuclear reactors to generate electricity could not be profitable: in order to create a nuclear generation programme the reactors needed to be built on a much larger scale. A difficult conflict arose between the need for safety, which can never be guaranteed when a chain reaction is technically possible, and the need for scale in order to create scale economies and ensure profitability.

The argument was won as soon as the US companies Westinghouse and General Electric moved into the production of nuclear plant on a large scale. They gambled that they could persuade the engineers to move with them, and they sidelined the question of safety by inventing the concept of ‘containment’. Although much of the debate around the Fukushima disaster has focused on this concept, it is in reality an example of discourse manipulation rather than scientific debate. It is of the nature of nuclear energy that it is explosive and cannot be contained: once a chain reaction begins it will generate energy beyond the control of engineering systems. 'Containment' is a concept that makes us feel safe with nuclear power, a PR word and not a scientific concept.

I introduce this example to demonstrate how the gap between scientifico-technical responses and policy can be jumped without adequate democratic debate, especially when matters of survival can be cited as justification. Similar unaccountable decisions are being made right now, in the context of climate change, about the next generation of nuclear power-stations.

The example is also useful in demonstrating that what is meant by ‘economies of scale’ cannot really be interpreted without bearing in mind the economist’s other notion of an ‘externality’. Economies of scale can be achieved by ensuring that the costs of a production process are minimised. In the case of the nuclear industry this meant ensuring that any potential risks could be excluded from the cost curves of the companies engaged in developing the technology: the costs of accidents and decommissioning would not, and never have been, borne by those who built the plant.
. Tweet
Posted by Molly at 13:22