While yesterday's budget could not be considered the launching of the class war, it was surely a new offensive. There was no attempt to conceal the transfer of value from poor to rich which has characterised this government's economic policy. The strategy of using the financial crisis, caused by the elites, to grab more power for exactly that same class was followed with blatant shamelessness. 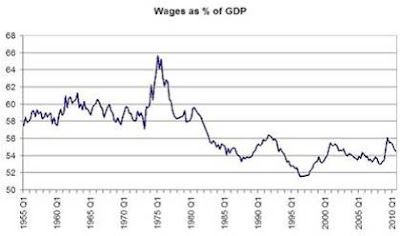 Duncan Weldon has illustrated the changing shares of the national product between the end of the Second World War and today: his graphic is striking in demonstrating the link between labour organisation and the share going to labour. This is not a hard lesson to grasp: ensuring equity requires struggle or, in the words of the South Wales trade unions, eternal vigilance is the price of freedom. We have forgotten the need for vigilance and Osborne is the result.

In a classic conjuring trick, Osborne focused our attention on the sideshow of the mansion tax, while the main event was actually the radical cuts to corporation tax. It had already been due to be cut to 25%, but it will now fall to 24% with two further 1% cuts in years to come. This will mean that Britain is following the 'pile them high and sell them cheap' business approach of Ireland, rather than the corporatist approach of our much more successful neighbours Germany and France, where corporate tax rates are well above 30%. This is not an industrial policy but part of a class war, to reverse the advances made in the last century, when those who controlled capital accepted their responsibilities to wider society.

I am a Quaker, so I have to follow my war analogies with care, but I would say that, if we compare Osborne's class war with the Second World War, we are currently somewhere in 1938. The mass of the British people are looking on with fear while Hitler strides across fairly distant parts of Europe grabbing territory, but they are still hoping that he will stay far enough away from them. This strategy of hunkering down and hoping for better times did not work then and it cannot work now. We need to find methods of active and passive resistance.
. Tweet
Posted by Molly at 06:59