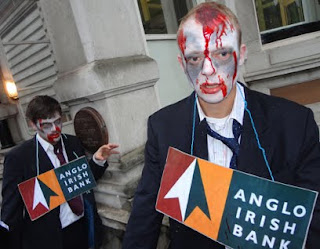 It was three years ago that I first used this title in an article I wrote for the Welsh left magazine Celyn (it means holly). Back then I argued that:

‘The implications of the public-spending cuts caused by bailing out the banks on such a massive scale are devastating. Borrowing announced in the budget amounted to £175bn. in 2009/10 and a huge £701bn. over the next five years. If you add in our liabilities for bad debts we have ‘insured’ (since they are already bad debts it seems certain that we are going to have to pay these liabilities) then the total we are in hock for is more than twice the value of all the activity in our economy for a whole year. Just the interest on this borrowing is more than £40bn., about a third of total NHS spending in any one year. Following this year’s budget public spending will fall from 48% of national income to just 39% by 2017-18.’

‘So this can be our political demand: an international debt jubilee to relieve the working people from the slavery of repaying mountainous debts for which they are not responsible.’

Although in Britain the majority have accepted the Big Lie about the public debt being our fault and our responsibility to repay, across Europe a movement for debt relief is spreading like wildfire, and expressing itself in the form of citizens' debt audits. In Ireland the process was rather academic and not political, but resulted in a popular call to abandon expensive attempts to support 'zombie banks'. In Greece the audit committee has become the focus of a nationwide campaign for an alternative economic policy. A civil society movement is building in France where it was launched at a meeting of 700 people in Paris in January.

This is the opportunity offered by the debt crisis: the old route of passivity and Danegeld has broken down in the face of the excessive greed of the owners of capital. What stands before us is the prospect of an economy based on equality and participation. The rest is up to us.
. Tweet
Posted by Molly at 07:41